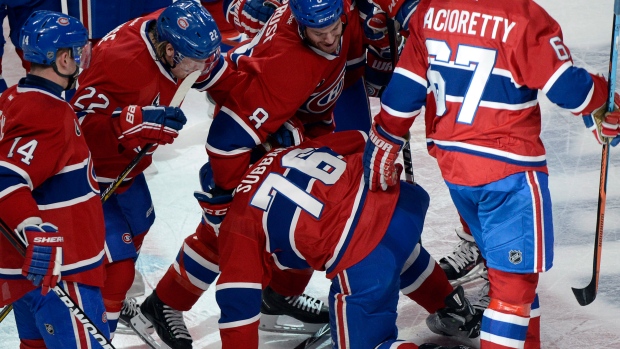 BOCA RATON, Fla. - On the final day of the NHL general managers meeting, the Players' Association got its first look at rule changes being proposed for next season, most notably adding some three-on-three play to overtime.

Players will have give their input on three-on-three, expanded video review and faceoff changes and must sign off before anything becomes official.

"I think we're on the same page," David Poile of the Nashville Predators said, "but what they always do is go back to their membership and they talk to all of their players."

Director of hockey operations Colin Campbell said the NHLPA was fine with adding a coach's challenge system for goaltender interference and pucks over the glass and for defending players having to put their sticks on the ice first on faceoffs but had some concerns about three-on-three overtime.

General managers were split on whether to go to the American Hockey League model of four-on-four for the first three minutes and then three-on-three from the next whistle to the end of a seven-minute sudden-death overtime or to simply play three-on-three for the existing five-minute overtime.

One issue is that the potential for an extra two minutes a game, while likely to reduce shootouts, would put more of a strain on top players.

"One point we made is if they felt the extra two minutes was more stress on their players, the point I made in talking to our managers was: There's going to be a little less stress on probably, arguably, your most important player, your goaltender, who will have less shootouts to face," Campbell said Wednesday. "He obviously faces the most stress in every shootout. There's a give and take on that one if that's their concern."

NHLPA divisional representative Steve Webb, who represented the organization at the meeting along with Joe Reekie, said players are intrigued about three-on-three and said the organization still needed to talk to players about the increased workload that would come with seven-minute overtime sessions.

The initial reaction seemed to be positive.

"I think it intrigues the guys, to see what the effects are going to be like playing three-on-three," Webb said. "I think the offensive guys like the opportunity to add more ice to showcase their abilities."

Montreal Canadiens players asked about three-on-three following their game Tuesday at the Florida Panthers expressed mixed feelings about the idea. Defenceman P.K. Subban, one of the players who stands to benefit from that extra ice, said it didn't matter much to him either way.

"Whatever decisions they make, I'll just play the game that way," Subban said in Sunrise, Fla. "To be honest with you it doesn't make a difference to me. Whether they decide to do it or not, I just play and adjust — make adjustments if I have to."

Forward Brandon Prust cracked a joke that it would just mean more time on the bench for him. While Prust doesn't mind the shootout, Subban said he just wants to win regardless of whether it goes to that or is decided in overtime.

Rookie Jacob De La Rose was involved in some three-on-three in the AHL and said it was "crazy," but in a good way. Webb said that the NHLPA would survey those players and others in the coming weeks before their executive board meeting in June.

The board and the joint NHL-NHLPA competition committee has to approve rule changes, whether it's three-on-three in overtime, coach's challenges or a tweak to faceoff rules. Ron Francis of the Carolina Hurricanes, suggesting having the player taking the faceoff closest to his goal put his stick on the ice first, and his colleagues overwhelmingly agreed.

"Obviously as a former centreman, you always feel you have a little more of an advantage if you can get in there second," said fellow Hall of Fame centre Joe Sakic of the Colorado Avalanche. "To try and help the offence, why not try it? I think it's a good idea."

In faceoffs at the centre dot, the visiting player would still put his stick on the ice first, which is the current rule.

All changes should be decided by late June because the NHLPA moved its executive meeting up from July and the GMs and board of governors will gather at the 2015 NHL Awards in June in Las Vegas.