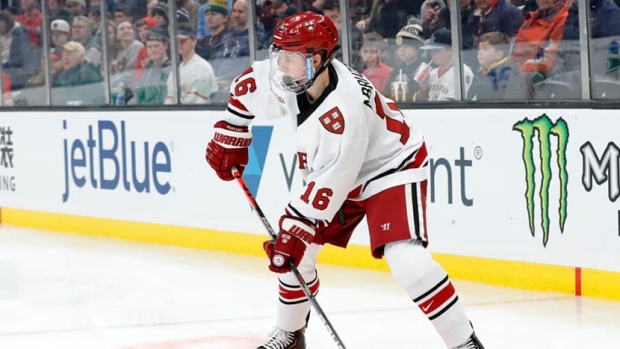 TORONTO — The Toronto Maple Leafs signed forward Nicholas Abruzzese to a two-year, entry-level contract for the 2021-22 and 2022-23 seasons, the team announced Saturday.

Abruzzese was originally taken in the fourth round, 124th overall, of the 2019 NHL Draft.

The native of Slate Hill, N.Y., represented the United States at the recent Beijing Olympics, scoring a goal and notching three assists in the four games the U.S. played.

The 22-year-old was the captain of the Harvard University hockey team this season, where he recorded nine goals and 33 points in 28 games, helping lead Harvard to the NCAA regional semifinal as he was named to the 2021-22 NCAA ECAC First All-Star Team.

During his 2019-20 season at Harvard, Abruzzese led NCAA rookies in scoring with 44 points in 31 games and was named ECAC Hockey Rookie of the Year.

“As an organization, we’re very thankful to Harvard head coach Ted Donato and his staff for their job developing Nick,” said Maple Leafs General Manager Kyle Dubas in a statement.

“Harvard’s academic reputation precedes itself but is also an elite hockey development program as evidenced by the number of players they have developed into National Hockey League players.”

Abruzzese joins Colin Blackwell and Alex Kerfoot as alumni of the Harvard Ice Hockey Program who have joined the Leafs.

This report by The Canadian Press was first published March 26, 2022.