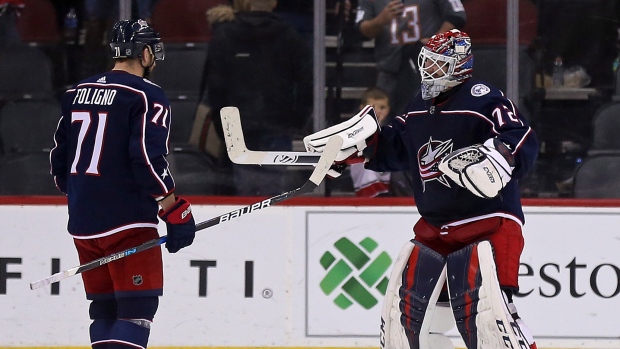 Nick Foligno isn't bitter or upset about the mass exodus of free agents from the Columbus Blue Jackets this summer.

It's just that in a few cases, he doesn't quite understand the logic.

Star winger Artemi Panarin, No. 1 goalie Sergei Bobrovsky and trade deadline acquisition Matt Duchene all signed elsewhere July 1 despite the fact Columbus swept the 128-point Tampa Bay Lightning in the first round of the playoffs before bowing out to the Boston Bruins in a tight, six-game series.

Foligno, the Blue Jackets' captain, gets Duchene's decision to sign with the Nashville Predators — he thinks the centre probably would have stayed if the perfect deal hadn't come along.

Panarin, who inked with the New York Rangers, and Bobrovsky, now a member of the Florida Panthers, are different stories.

They'd been around a lot longer, endured some of the tough times, and were part of a core that finally got Columbus its first post-season series win in franchise history.

But the allure of the Big Apple and South Beach — along with boatloads of cash — was too tempting.

"We did everything we possibly could to show them we're a legit team," Foligno said in a recent phone interview. "In a way it was a surprise (they left), but it was their right.

"My thing is, you don't leave a good team to try to find another one. What we're building in Columbus, everyone is excited to be part of it. You want guys fully on board."

Panarin, 27, signed a seven-year, US$81.5-million contract with the Rangers that made him the highest-paid winger in NHL history. Bobrovsky, who will be 31 when the 2019-20 season begins, inked a seven-year, $70-million deal with the Panthers.

And Duchene, 28, agreed to a pact in Music City worth $56 million over the next seven seasons.

Foligno said that while seeing those teammates leave was difficult, he had no complaints regarding their commitment on the ice.

"Had they dogged it or caused problems or not given it their best, then you have issues," said the 31-year-old. "But between Bob and (Panarin) and Matt, they all worked extremely hard. It's their choice to go. You don't agree with it, but you want guys that want to play in Columbus."

Foligno's focus will soon pivot to the season ahead where the Blue Jackets have already been written off in many circles, but his first order of business is an important charity event coming up this weekend in his hometown of Sudbury, Ont.

Foligno and a number of NHL stars, including Duchene, Toronto Maple Leafs winger John Tavares and Columbus defenceman Seth Jones, will play an exhibition game against local doctors on Sunday, with proceeds going to the NEO Kids Foundation.

Families in northeastern Ontario often have to travel to bigger centres for children's care, which disrupts the lives of parents and kids alike.

Foligno is hoping that soon changes.

"There's no reason we can't have our own (children's) health facility," he said. "We'll never compete with Toronto or Ottawa, but check-ups and standard procedures would be huge.

"This is such an important thing for me, selfishly, because I know what it feels like."

He most certainly does.

Foligno's daughter, five-year-old Milana, has battled a congenital heart defect since birth, and had to undergo surgery during the most recent hockey season. Then his youngest son Hudson, who turned two in May, was admitted into intensive care with a collapsed lung related to a serious bout of pneumonia.

And in the middle of all that, three-year-old Landon broke his leg.

Foligno said all the kids are doing well now, enjoying time by the lake at the family's off-season home.

But it was a trying stretch.

"My wife and I have been able to look back and say, 'Wow, what the hell happened?'" Foligno said. "When you're in it, you just do whatever you can to get through."

And while not even in the same universe as potentially life-and-death family situations, he expects his Blue Jackets to get through their recent upheaval.

General manager Jarmo Kekalainen went all-in prior to February's trade deadline, not only acquiring Duchene, winger Ryan Dzingel, defenceman Adam McQuaid and backup netminder Keith Kinkaid, but also hanging onto Panarin and Bobrovsky knowing they could walk for nothing.

The gamble, which involved a number of draft picks and prospects exiting the asset cupboard, was only successful up to a certain point, but Foligno agreed the time was right to make a push.

"I'd much rather have a GM that's trying to win than one that's trying to plan and be strategic," he said. "You want a guy that's not afraid to take calculated risks and is in the trenches with you."

Columbus dipped a toe in free agency as all that high-end talent was leaving town, signing winger Gustav Nyquist, who turns 30 next month, to a four-year, $22-million contract.

Foligno also believes younger players that might have had their paths blocked if Panarin, Bobrovsky and Duchene remained will get a chance to flourish.

"We're done this chapter," he said. "It was great while it lasted, but now it's our opportunity to move forward."

And after what Foligno and his family have been through over the last 12 months, a roster turnover and whatever adversity's to come is a welcome challenge.