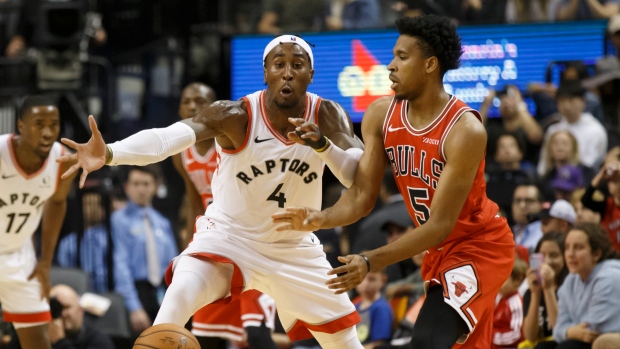 Toronto Raptors head coach Nick Nurse didn't mince words when he was asked how new players, namely Stanley Johnson and Rondae Hollis-Jefferson, were fitting in with the team's defensive identity.

Don't have to work too hard to read between the lines here. Nurse didn't sugarcoat it - both Johnson and Hollis-Jefferson have underwhelmed in camp. They also haven't looked good in the preseason games. His message is clear: defend and play harder or open the season on the bench.

"Nope. Nope. Nope. Those guys have not understood A) how hard we play, B) our schemes, that defence is a priority for them, etc.," Nurse explained when TSN's Josh Lewenberg asked if Johnson and Hollis-Jefferson have helped since both were brought in partly because of their defensive mentality.

"We've got some work to do with that crew. I tell them there's a couple spots, come Tuesday night there's a couple spots there open if somebody wants them. And I keep telling [them] show me you're going to play defence, show me you're going to play hard, show me you understand our coverages. And then whatever you do on the other you're going to get opportunities just because of who you're on the floor with and they'll come to you, you don't have to come down and occupy 95 per cent of your mind with how you're going to break down and get your next shot. It's not going to get you on the floor right now. So we've got some work to do. We've got to find who's going to blend in quickly defensively with this crew."

There are 8 players Nurse frequently brings up as locks for the rotation (/potential starters): Lowry, FVV, Norm, OG, Siakam, Ibaka, Gasol, McCaw - all holdovers, champions and guys that know what he expects. It's clear those are the guys he trusts, at least early in the season.

The defending NBA champion Raptors signed Johnson, Hollis-Jefferson as well as Terence Davis and Matt Thomas this summer following the departures of Danny Green and superstar Kawhi Leonard to the Los Angeles-based teams.

Later on Wednesday, the Raptors waived power forward Sagaba Konate, according to Lewenberg.