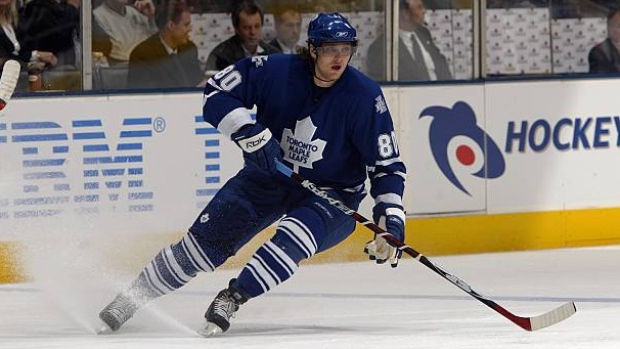 Nik Antropov says he never imagined himself in any sort of coaching job after his 13-year National Hockey League career came to a close at the end of the 2012-13 season.

But it turns out his hockey journey – from arriving in North America in 1999 as a 19-year-old first-round pick who understood very little English and spoke even less, to eventually carving out a 788-game career with the Toronto Maple Leafs, New York Rangers, Atlanta Thrashers and Winnipeg Jets – made him the ideal candidate for a player development role with the club that drafted him.

Now, buoyed by the totality of his experiences, the Kazakhstan native is helping shepherd the Leafs' next wave of players, specifically those coming from Russian-speaking countries, as a skills consultant for the club.

“I was in [those Russian players'] shoes 20 years ago. I tasted what they've been tasting here now,” Antropov told TSN. “It's really tough to come to a different country, with a different culture. I know this myself. And I'm enjoying helping them. It's been absolutely a blast for me.”

That ability to marry development and communication is why, in mid-2019, Leafs’ senior director of player development Scott Pellerin approached him at son Danil’s Ontario Hockey League game in Oshawa to discuss a job opportunity.

It was an appealing offer, and Antropov was ready for a new challenge. Plus, he'd already settled on Canada as his permanent home, becoming a citizen in May 2007 and settling here after a two-year stint with the KHL's Barys Astana from 2013-15.

By October 2019, Antropov was officially part of the Leafs' fold, his 6-foot-6 frame becoming a regular fixture at Marlies’ practices as he got to know the team’s crop of prospects.

“Nik has been a great addition to our player development team,” Leafs general manager Kyle Dubas told TSN. “His ability to communicate with Russian players, while also having the experience of having played for the Maple Leafs and what that adjustment is like for a very young man from Eastern Europe, has been tremendous. And in addition to understanding how unique it is to be a Maple Leaf, Nik also has a son who plays in the Ontario Hockey League and has a great way of communicating with our players and understanding young athletes of this age.”

Antropov has been sticking close to the Leafs’ Russian imports, including Ilya Mikheyev, Egor Korshkov and, most recently, Alexander Barabanov, the KHL product who agreed to a one-year, entry-level contract with the Leafs earlier this month.

“I talked to him right after the signing was announced. I congratulated him and said welcome to the team,” Antropov said of Barabanov. “But he's one of the guys who's not speaking any English actually, so I'm sure I'll be working a lot with him. And I knew him, he knew me, because one of my last two years in the KHL, we played against each other a couple of times, so it makes it a little bit easier.”

The fact Barabanov is also a little older, turning 26 in June, and already has seven years of professional experience in the KHL, could potentially affect how smoothly he segues to the North American game. That’s where Antropov’s guidance can be all the more valuable.

“When you're younger, it's easier to adapt,” Antropov explained. “When you're older, you already have your routine and what you’re used to, so it can be harder to step into something new. It's a harder adjustment sometimes."

In his short tenure as a consultant, Antropov has already dealt with players at various levels of preparedness to tackle this new frontier in their life and career. Mikheyev, for example, found his groove early after leaving the KHL’s Omsk Avangard to sign a one-year, entry-level deal with the Leafs for 2019-20.

“He was pretty good because he learned some English first, so he can communicate a little bit with the guys, which is really good to see,” Antropov said. “Most of the Russian guys, they come in with limited English or no English at all, so that's a tough situation for them, a tough environment to be in without language to communicate. Even to go out for dinners or even to go grocery shopping, it's really tough. So if they need any help or suggestions on anything, my phone is always open for them; they just call or text and we go from there.”

Antropov’s latest project has been Korshkov, a second-round (31st overall) pick by the Leafs in the 2016 NHL Entry Draft who also grew up in Kazakhstan.

The 23-year-old came over from the KHL’s Yaroslavl Lokomotiv for the Marlies’ playoff run last spring, ahead of playing his first full season of AHL hockey in 2019-20.

Korshkov’s quick ascent (25 points in 44 AHL games) so impressed former Marlies’ head coach and current Leafs’ bench boss Sheldon Keefe that the winger earned a one-game call-up to the NHL on Feb. 16, where he scored his first NHL goal.

“He's adapting really well in terms of on [the] ice,” Antropov said of Korshkov. “That was the reason he got called up for that game. Even though it was just one game, he deserved that call; he'd been playing really good in the minors. Off ice, it's been a little bit tougher without any English or language [skills], although he's gotten way, way better than when I saw him at training camp [in fall 2019]. I can see he can talk to the guys in the dressing room or even on the bench during the game. So he's trying to communicate, which is good to see.”

It’s easy for Antropov to put himself back in Korshkov’s shoes, navigating a world that’s simultaneously familiar (hockey is hockey, after all) and entirely foreign. But unlike Korshkov and Barabanov, who have few other Russian-speaking touchstones in the Leafs’ organization, Antropov was one of eight Russians who played for Toronto’s 1999-2000 squad, something that was both a gift and a curse.

“Except for [words like] hi, bye, sit down, thank you, I didn't know anything,” Antropov said. “But for me, it was still a little bit easier because we had so many Russians at the time. I didn't have to speak English for my first three or four years. If I needed something, I just asked one of the guys, and they would translate it for me. I wish we did not have that many guys though, so I would have learned English faster. When everybody got traded or they signed somewhere else, that's when reality kicks in. That's when I had to try to communicate with the guys.”

Antropov admits the Leafs did try to help advance his English early in his playing career, but professional help isn’t what ultimately did the trick.

“I think I took one English class. The team provided me with the teacher,” he said. “I took one, or maybe two [classes], but the schedule is really, really hard, it's always travel or practice. So after one or two lessons I never came back there. You learn everything in the dressing room, literally. Just hanging out with the guys, talking to the guys.”

While it’s been two decades since Antropov mastered those particular skills, becoming a development consultant has presented a whole new series of challenges.

It’s not a job Antropov ever expected to undertake, but he’s come to realize the role suits his abilities. As Antropov steers nervous new players into their new normal, he’s right alongside them in many ways, just figuring it out as he goes.

“It was a big step for me, just going on the ice with the Marlies and even with the Leafs,” he said. “I’m like, ‘Holy, I have to express myself.' I was a bit shy at first, but I like to be on the ice with the guys and I like what I'm doing right now. It's nice when you get to see what you worked on with a player for the past summer or however long, whether it's on a particular play or situation, and then you see the execution on the ice. It actually gives me some real joy.”