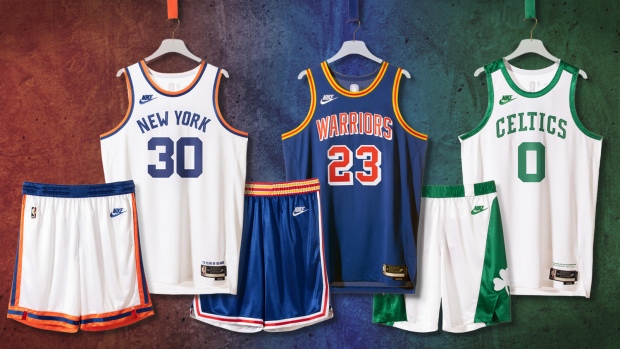 In celebration of 75 years of NBA basketball, Nike revealed new Classic Edition uniforms to honour three teams who have been in the league since its creation. The Boston Celtics, New York Knicks and Golden State Warriors (known then as the Philadelphia Warriors) will be recognized with celebratory uniforms this upcoming season.

“Retro uniforms are nothing new in basketball. What is new is how the Nike NBA Classic Edition uniforms intersect with such a pivotal moment in the league’s history,” says Nike Basketball design director Elesban Montoya in a press release. “A big reason for the merger’s success was the fan support. So this is our spin on historic uniforms, but it’s also an emblem of respect for the fans who rallied for their teams and showed up for the league over the years.”

The three new uniforms will all feature the original Nike sportswear logo for the first time ever on an NBA uniform. The jersey and short sets feature traditional font and colour blocking to honour classic uniform design details.

While these Classic Edition uniforms are limited to just three teams, the league will be implementing 75th anniversary branding onto several items of game-wear apparel for many of its teams.

The 2021-22 NBA season tips off on October 19. The league is expected to name its 75 greatest players as part of its anniversary plans.