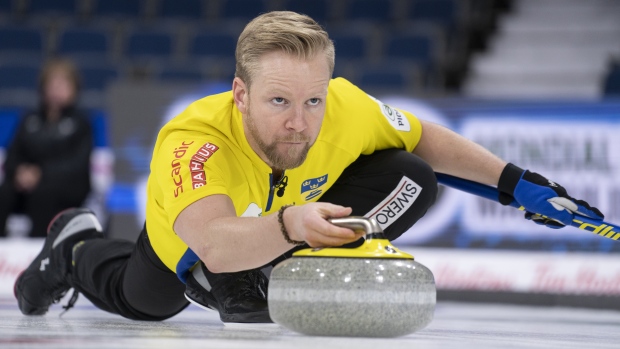 Five-time world curling champion Niklas Edin made the trip to western Canada this weekend from his home country of Sweden and is heading back a winner.

Edin and his rink of third Oskar Eriksson, second Rasmus Wrana and lead Christoffer Sundgren ran the table at the Nufloors Penticton Curling Classic, capping the bonspiel off with a 5-4 extra end victory over Ontario's Glenn Howard in Sunday's final.

Edin, 36, scored a single point in the extra with hammer to seal the victory, his first of the 2021-22 curling campaign.

Team Edin went 8-0 over the five-day event, including wins over Calgary's Kevin Koe in the round robin as well as Langley B.C.'s Tyler Tardi in the quarterfinal and Winnipeg's Mike McEwen in the semi-final.

This was the third final for Team Howard this season and their second time losing. Howard, who will compete at the Canadian Olympic Pre-Trials later this month in Nova Scotia, defeated Matt Dunstone and Colton Flasch, both out of Saskatchewan, in the playoffs on route to the championship game.

Koe, John Epping and Jim Cotter all finished with 2-3 records in the round robin and missed the playoffs.

Elsewhere on the curling circuit, Norway's Steffen Walstad defeated Italy's Joel Retornaz, 5-4, in the final of the Curling Masters Champery in Switzerland.