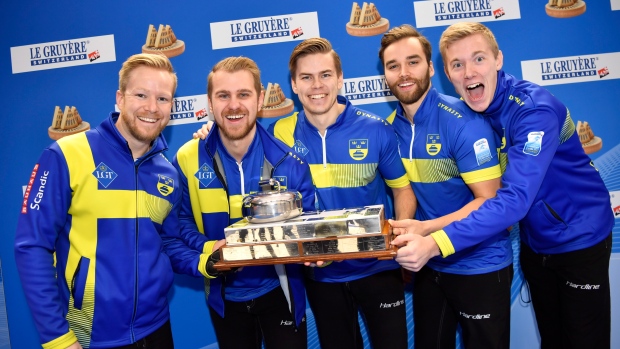 Sweden has swept the European Curling Championship in their home country.

Karlstad's Niklas Edin is a European curling champion for the seventh time in his career after beating Switzerland's Yannick Schwaller, 9-3, in Saturday's final in Helsingborg, Sweden.

On the women's side, Stockholm's Team Anna Hasselborg won their second consecutive title after beating Scotland's Team Eve Muirhead in the final, 5-4.

Hasselborg was forced to make a tough double takeout with the last stone of the game to secure the victory. Hasselborg's rink of third Sara McManus, second Agnes Knochenhauer and lead Sofia Mabergs beat Team Silvana Tirinzoni in the European final last year.

An unbelievable final end is finished off with a perfect runback to score two points for the win! 🇸🇪🏆#ECC2019 #curling pic.twitter.com/xeCvCPiPIQ

It was Edin's sixth European title in eight years.

Edin, third Oskar Eriksson, second Rasmus Wrana and lead Christoffer Sundgren went a perfect 11-0 record in their home country to stand atop the podium at the prestigious event.

“It feels really, really good. We played so amazing all week," Edin told the World Curling Federation after the game. "I don’t think we’ve ever played better throughout a whole event. There were no close games.  Looking back at it, it’s our most dominant win ever and doing that at the European Championships feels unreal.”