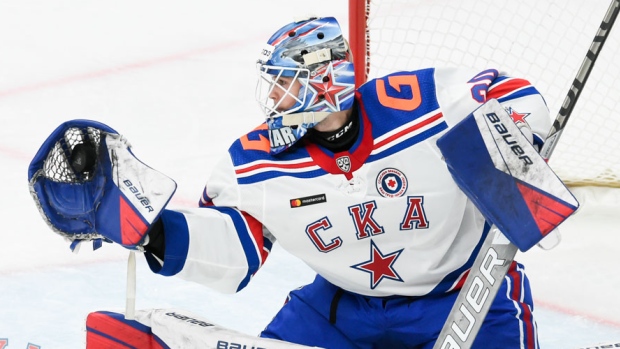 Nikolai Khabibulin, the first Russian goalie to win the Stanley Cup, is confident Yaroslav Askarov will one day be a star in the National Hockey League.

"If he keeps developing there's a pretty high chance of that," said Khabibulin​, who is the goalie coach for Russia's national junior team. "For this guy, the sky's the limit because he's got all the tools. Also, he is headstrong and very driven. He doesn't like to lose. He always tries to get better and better and better."

Askarov is expected to be the first goalie selected in Tuesday's NHL draft with TSN director of scouting Craig Button projecting him to be picked No. 11 by the Nashville Predators.

"He has the triad of skills necessary to dominate," Butt​on said, "the sense, his use of size to close down the net and his outstanding quickness both in his movement and in his mind. I see him as an elite franchise goalie in the mould of Carey Price and he's the best goalie I've seen entering the draft since Carey Price was selected in 2005."

Price was the last goalie to be picked in the top 10 going fifth overall to Montreal. Since then Jonathan Bernier (2006 to the Los Angeles Kings) and Jack Campbell (2010 to the Dallas Stars) have been the highest goalies picked with both going 11th overall.

During a Zoom interview with TSN from ​his home in Yekaterinburg, Russia this week, Khabibulin explained why Askarov reminds him of Tampa Bay's Andrei Vasilevskiy, who currently holds the distinction of being the top Russian-born goalie selected in the NHL draft (19th overall in 2012). Khabibulin also offered an assessment of how Askarov is looking early in the KHL season.

What impresses you the most about Askarov?

"What I like about him is, first of all, his mindset because he always wants to get better. Also, with the good size that he has (6-foot-3), he's very explosive, goes side to side very quick. He reads the play pretty well. He's not afraid to hold his ground ... he's probably the best puck-handler in the KHL right now, which is quite unusual for a Russian goalie to be like that. He's not afraid to get out of the net. He's not afraid to make plays. Sometimes he could make an easier play than he does, but I always encourage him to do it even if he makes mistakes occasionally. As he gets older I think he'll realize what he should do and what he shouldn't."​

Askarov posted a .900 save percentage in two VHL (second-tier league) games this season, but was then up to .974 in three KHL games. How do you assess how he's started?

Askarov struggled at last year's World Juniors with an .870 save percentage in five games. What should he take from that experience?

"I think that was a great experience for him. He realizes he needs to be better. I think this could be a little bit also my fault. I pressed for him to be in. Maybe he wasn't quite ready yet, but he looked so good in training camp that for me he was the clear No. 1 goalie. Unfortunately it didn't work out, but he definitely took this as a lesson. I was watching him, like I said, in KHL games not long ago, and he improved quite a bit compared to New Year's."

Is there a current goalie that he reminds you of?

"If I had to compare him to one it would probably be Vasilevskiy just because he's got good size and he's also very explosive. He's got great flexibility as well with long legs just like Vasilevskiy. I've seen a number of times that players think they got him and try to slide the puck in and all the sudden the pad comes in and there's no goal."

"Maybe. I don't know the mentality of the [position] players when they play a right-glove goalie. But they're used to shooting to certain spots and in a game you don't have as much time to put the puck where you want. They come out in practice and put it in certain spots and then with right-glove goalies the spots are different so they have to adjust and I would think it takes some time to get used to a goalie that's different."

How high should Askarov be picked in the draft?

"You know what, it's hard for me to say, because I don't know what his competition is. Talking to some people, I guess there's quite a few good forwards in the draft so it's really hard to compare. But I think he should go pretty high. I would put it this way, if I was a general manager I would want a guy like that on my team."