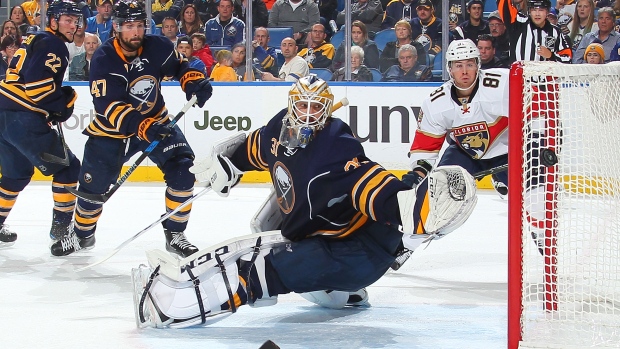 BUFFALO, N.Y. — After getting booed off the ice in their last home game, the Buffalo Sabres received a standing ovation from the crowd at KeyBank Center on Saturday.

Anders Nilsson made 33 saves in his second NHL shutout and Sam Reinhart had a goal and an assist for Buffalo in a 3-0 victory over the Florida Panthers.

Johan Larsson and Kyle Okposo also scored and the Sabres (2-3-2) snapped a four-game winless streak with their first home victory.

Buffalo had one goal in its first two home games, but scored in all three periods Saturday.

"That's the way we have to play," Reinhart said. "Right from the start with that mentality, and that's been the struggle this year. To finally come out with a big push in the first and continue that with all four lines was important for us tonight."

Roberto Luongo stopped 22 shots for Florida. The Panthers (3-4-1) have lost five of six and are winless in the first three of a four-game road trip.

This was the first shutout for Nilsson since March 4, 2012, during his rookie season with the Edmonton Oilers.

"Of course, that's always nice, but I think the most important thing is the two points we got tonight," Nilsson said. "That's huge for us and it means a lot for our confidence."

The Sabres scored twice on the power play while killing four penalties. The Panthers had a power-play goal in each of their last four games.

"Ultimately, it comes down to we weren't able to find one on the power play and get that jump or spark that we needed," Panthers defenceman Keith Yandle said.

The Sabres took a 1-0 lead on Larsson's first goal of the year. Marcus Foligno pushed the puck into the corner where Brian Gionta sent a backhand pass to Larsson in the right circle while falling down. Larsson lifted a wrist shot over Luongo's glove.

Okposo scored on the power play to make it 2-0 in the second period. Luongo stopped Reinhart's deflection of Rasmus Ristolainen's shot from above the right circle. Okposo lunged at the rebound off the crossbar and slipped a backhander under Luongo's blocker for his second goal of the season.

A hooking penalty on Jaromir Jagr led to Reinhart's power play goal with 11:12 left in the game. Reinhart's pass from behind the net bounced in off the skate of Florida defenceman Mark Pysyk, a former Sabre. It was Reinhart's first goal of the season.

Florida: at Detroit on Sunday.

Buffalo: at Winnipeg on Sunday.

Buffalo F Nicolas Deslauriers was hurt in a play along the boards and was being evaluated. The team did not specify what sort of injury.

F Shawn Thornton and D Steven Kampfer entered the Panthers' lineup for the first time this season. Rookies D Michael Matheson and C Kyle Rau were healthy scratches. LW Jussi Jokinen missed his fourth straight game with a lower body injury. ... Lehner dressed as the backup after missing two games with an illness. Lehner practiced Friday and said he expects to start the next game on Sunday. C Jack Eichel (high ankle sprain) and LW Evander Kane (cracked ribs) are both progressing in their rehabilitation but are not yet ready to practice, coach Dan Bylsma said Friday. ... Pysyk and Buffalo's Dmitry Kulikov played against their former teams for the first time since the Panthers and Sabres swapped defencemen at the NHL draft. ... Ristolainen leads the Sabres with seven assists. ... Linesman Tim Nowak received a plaque and autographed sticks from each team for appearing in his 1,500th NHL game. Nowak is from suburban Buffalo. ... The Sabres sent G Linus Ullmark to the minors after the game.