'Love what he did': Tkachuk credits Rittich, special teams for bounce-back victory

On the hunt for a bargain winger option to shore up your fantasy hockey lineup? Look no further than Carolina Hurricanes forward Nino Niederreiter.

Niederreiter, now 28 years old, is off to a relatively hot start in his third season in Carolina. The Hurricanes winger – predominantly playing with Vincent Trocheck and Martin Necas – has nine goals and three assists (12 points) in 16 games, and is one of many reliable attacking options for head coach Rod Brind’Amour.

Most importantly for this discussion: he is rostered in only 57 per cent of leagues, meaning he’s either available in free agency or can be acquired at a reasonable cost via trade.

So why should someone add Niederreiter to their watch list? After all, we are talking about a historically middle-six winger option whose most productive offensive season was a 25-goal season in Minnesota five years ago. In that season, Niederreiter was the beneficiary of playing a significant number of minutes with a very gifted passer and playmaker in Eric Staal.

But this year, at least so far, has the hallmarks of another breakout season. Let’s consider where Niederreiter sits relative to his peers in a few key categories, all at even strength:

I could carry this on for quite some time, but I think the point is obvious: Carolina is frequently on the attack with Niederreiter on the ice, and Niederreiter is the most trigger-happy skater within that five-man unit.

But the truth is that all three Carolina forwards are generating offence from different levels in the offensive zone, and ultimately most of their shifts look like a shooting gallery against besieged goaltenders.

Their shot profiles with Niederreiter on the ice are silly, quite frankly: 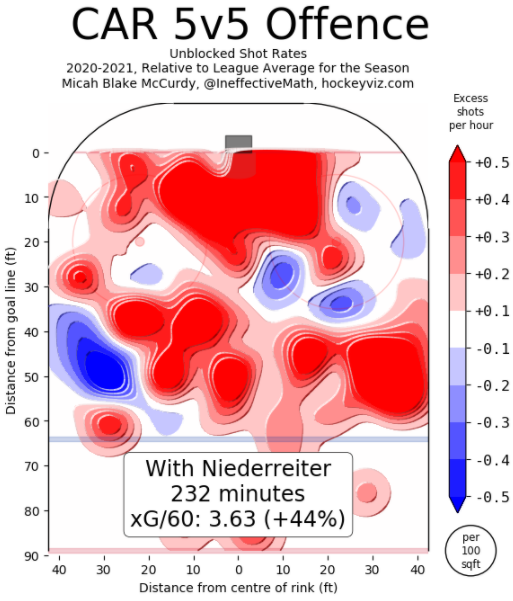 But merely carrying a high shooting percentage does not make a player a buy-high candidate. In this case, one can reasonably argue that the sheer offensive volume that Niederreiter and his linemates are generating are safety nets against any shooting percentage regression.

There is one buyer beware point to consider with Niederreiter, and that concerns the construct and deployment of this Hurricanes team.

Brind’Amour has a lot of comfort with his forward lines, so much so that the usage for most of the Hurricanes forwards are indiscernible from one another at even strength. With confidence in his lines, Brind’Amour can level load the ice time for each player, which may lessen offensive opportunity for any given player over the course of the game.

But that line is magic right now, and Niederreiter is a big part of it. Go get him!