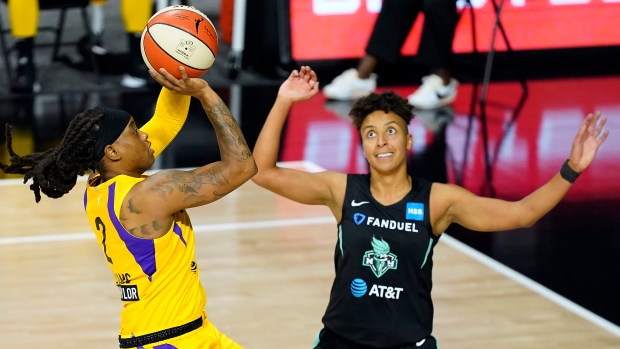 The Sparks (15-5) remained in the hunt for a top-two seed in the postseason.

Candace Parker had eight points, four rebounds and four assists in the first quarter as Los Angeles built a 25-12 lead. The Sparks used a 26-15 third quarter to take a 22-point lead into the fourth.

Parker finished with 14 points, five rebounds and seven assists, and Chelsea Gray had nine assists for Los Angeles (15-5). The Sparks were missing two starters as Brittney Sykes did not play after taking a knee to the stomach in the third quarter on Sunday. Sydney Wiese also hurt her ankle in the game.

Jocelyn Willoughby scored 21 points, making all five of her 3-pointers, for New York (2-17), which has lost five straight. Kia Nurse had 13 points and seven rebounds and Paris Kea scored 11.

Willoughby scored 13 of New York's 31 first-half points, but the Liberty still trailed by 11 points at the break.