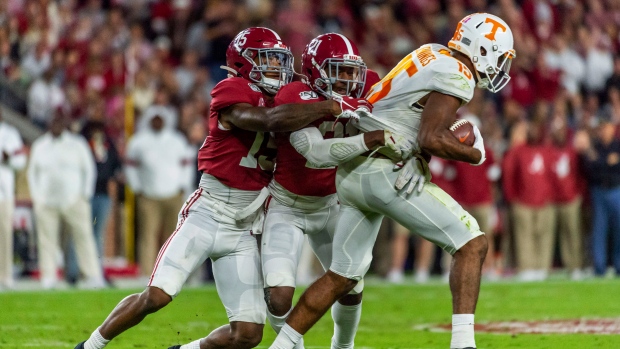 TUSCALOOSA, Ala. -- With Tua Tagovailoa hurt, No. 1 Alabama turned to the defense and Najee Harris to pull out a 35-13 victory over Tennessee on Saturday night.

The Crimson Tide (7-0, 4-0 Southeastern Conference) faced its first test of the season without last season's Heisman Trophy runner-up against the five-touchdown underdogs. Both starting quarterbacks left the game before halftime, and the Volunteers (2-5, 1-3) put up a fight much of the way.

Tagovailoa, the leader of a normally high-powered offense, left with an ankle injury in the second quarter and coach Nick Saban said he is likely to miss the next game against Arkansas. He called time out before the play clock ran out after a sack.

"I didn't even know he was hurt," Saban said. "He said he felt like he twisted his ankle."

The end result was familiar: Alabama's 13th consecutive win over the rival Vols.

Trevon Diggs recovered Guarantano's fumble on fourth-and-goal from the 1 and raced 100 yards for a touchdown to end the threat. Tennessee could have cut the deficit to a touchdown, down 28-13.

"This is the first time we had to grind one out and we really had to make plays," Saban said.

Vols coach Jeremy Pruitt had some angry words for Guarantano as the quarterback walked toward the sideline, pointing his finger toward him and briefly grabbing at his facemask.

Harris was already delivering before Tagovailoa's injury. He wound up running for 105 yards and two touchdowns and adding 48 yards on four catches. It was the second straight 100-yard game for a playmaker often overshadowed by Tagovailoa and the passing game.

Alabama got a cushion when reserve wide receiver Slade Bolden threw a 6-yard touchdown pass to a wide-open Miller Forristall in the end zone with 4:55 in the third. Bolden did a celebratory dance toward the sideline, where he was swarmed by teammates.

It was a needed pick-me-up with the Vols riding momentum and having cut it to 21-13 with a field goal. The defense then made a stop with Terrell Lewis sacking Guarantano on third down.

Tagovailoa finished 11-of-12 passing for 155 yards but also threw an interception on first-and-goal from the 2 when he scrambled around and forced the ball. Backup Mac Jones passed for 72 yards and is expected to get his first start.

Tennessee: Came closer to the Tide than any other opponent this season. Had 13 penalties for 93 yards. Guarantano was 7 of 16 for 55 yards. Maurer was 5 of 7 for 62 yards with an interception.

Alabama: Survived a rare bad decision by Tagovailoa and his injury. A young defense delivered when it had to. Alabama also was heavily penalized, flagged eight times for 93 yards.

Tennessee middle linebacker Daniel Bituli was ejected for targeting in the second quarter for a hit on receiver Jerry Jeudy near the goal line. The Vols were without linebacker Henry To'o To'o for the first half for a targeting infraction against Mississippi State.

When Alabama's Joseph Bulovas lined up for a 41-yard field goal attempt late in the first half, Tennessee called time out. Then another one, and finally a third while Tide fans booed. The strategy may have worked because Bulovas' kick went wide left.

Tennessee hosts South Carolina, which lost 38-27 to No. 9 Florida.