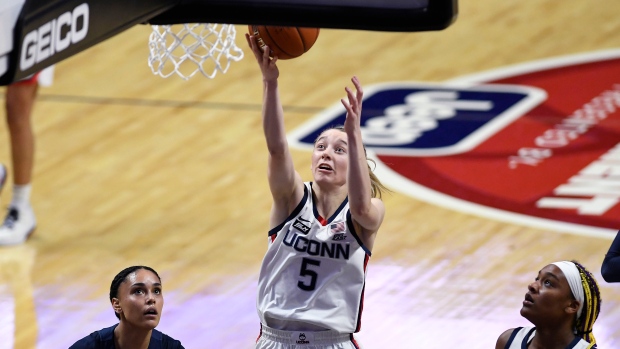 Christyn Williams added 14 points for the Huskies (22-1). Olivia Nelson-Ododa collected each of her 10 points and 11 rebounds in the first half.

UConn has now won 158 straight games against conference opponents since losing to Notre Dame in the Big East title game in 2013.

The biggest trouble for UConn occurred in the third quarter, when freshman guard Nika Muhl (five points, four rebounds) twisted her left ankle while making a pass. She had to be helped to the locker room and came back to the bench a few minutes later on crutches.

UConn put the game away early. The Huskies’ first four baskets were layups, and they were ahead 18-6 after 10 minutes.

Connecticut continued a 15-2 run into the second quarter and outscored the Red Storm 24-6 in the paint over the first 20 minutes, led by Nelson-Ododa’s seventh double-double of the season.

Leilani Correa and Unique Drake each had seven points for St. John’s (8-15).