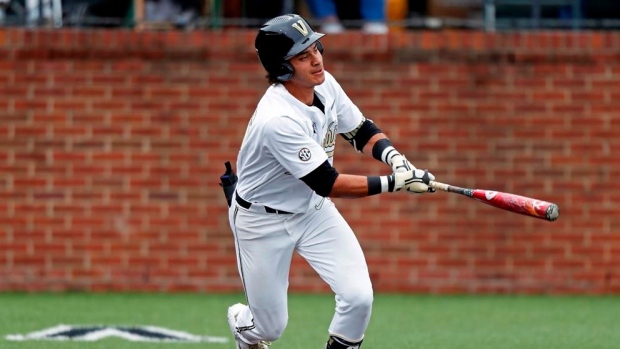 The Toronto Blue Jays and first-round pick Austin Martin are in agreement on a the team announced.

TSN Blue Jays Reporter Scott Mitchell adds the deal will be for well north of the slot value of approximately $6.2 million.

Can confirm reports #BlueJays have signed 5th overall pick Austin Martin to a deal well above the slot value of $6.2 (ish) million.

As I reported a few weeks ago, Scott Boras was believed to be seeking a bonus that started with a 7 for the Vanderbilt star.

Martin, who was the No. 5 overall pick in last month's draft, was viewed by many as a potential steal at five given his projections leading into the draft.

“We are truly excited to be adding Austin to our organization,” Blue Jays General Manager Ross Atkins said.

“Throughout this whole process, from our scouting reports in high school, all the way through college, the more information we gathered on him the more excited our group became. His willingness and drive to be a great player is what we feel makes him such a great fit with our group. Coupled with his offensive profile and positional versatility we couldn't be happier to officially make him a Blue Jay. I'd like to thank his negotiating team throughout this process and welcome Austin to the Blue Jays family.”

The 21-year-old hit a combined .368 over his three seasons at Vanderbilt, including .377 in 16 games in 2020. He spent time at third base, second base and centre field throughout his collegiate career.

Meanwhile, the club also announced that fourth-round selection and pitcher Nick Frasso (No. 106 overall) has also signed with the Jays, meaning their entire 2020 draft class is now under team control.