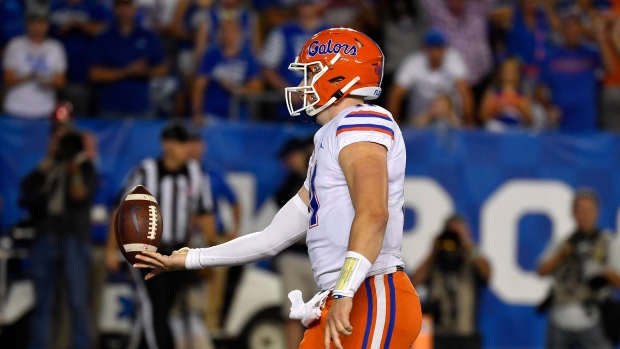 While Saturday in Gainesville might be the 49th meeting between SEC rivals, the Tennessee Volunteers (1-2) and No. 9 Florida Gators (3-0), it will be the first start of Kyle Trask’s NCAA career.

A dislocated ankle during Saturday night’s 29-21 comeback win over Kentucky means that Feleipe Franks’ season is over and Dan Mullen will hand the reins of his offence over to the redshirt junior as the Gators look to continue their perfect start to the season.

You can catch Tennessee vs. No. 9 Florida LIVE on Saturday at 12pm et/9am pt on TSN1, on TSN Direct and streaming on TSN.ca.

With Franks hurt, Trask entered the game against the Wildcats in the fourth, throwing for 126 yards on 9-for-13 passing and rushing for a touchdown, to help overturn a 10-point defecit and score 19 unanswered in the quarter.  Not only will Saturday’s game be first start of Trask’s collegiate career, it will mark the first time the Manvel, TX has started a game since he was a high-school freshman.

But Vols coach Jeremy Pruitt isn’t expecting any rust after watching how the Gators operated following the injury to Franks.

“They ran their offense: same plays, nothing different,” Pruitt said at his weekly press availability. “They might’ve even executed better. Obviously, they scored more points there in a short period of time, but as a guy that competed for the quarterback job, [Trask is] very talented and has experience.”

While Trask will start, Mullen envisions backup Emory Jones – a more mobile QB than Trask – also getting playing time in order to give the offence a different look and keep  the Vols guessing.

“Each guy brings a little bit something different issue to the defence,” Mullen said this week. “But it crosses over a lot, too. I think that will be kind of fun for us offensively to put it all together.”

The Vols got their first win of the season last weekend in a 45-0 rout of Chattanooga, following a pair of disappointing losses to start the season – falling to Georgia State, 38-30, and then a double overtime loss to BYU, 29-26. Tennessee heads into Saturday as a 14-point underdog, but Pruitt doesn’t think that will change his team’s mentality.

“I don’t think that has much barring on the game,” Pruitt said. “We’ve got to go out there and play good football, clean football, play hard, play tough, be relentless, and play for four quarters. And, we’ve got to practice that and create the right habits during the week.”

Despite being heavily favoured, Mullen believes that his Gators are going to be up against everything the Vols can muster.

“They are a talented group, they are young but they have talent,” Mullen said of Tennessee. “If you look at how the year has gone, they are a much better team than they get credit for. BYU beat them with a fluke play at the end of the game, a week later [BYU] beat USC… they have great skill players, an experienced QB, a lot of talent on defence… I think some of the criticism may not be as justified as people think… as they continue to grow, they could have a good year.”

History favours the Gators on Saturday with the rivalry having turned lopsided in recent years. After winning 13 of the first 15 meetings between the two programs, Tennessee has won just seven of the last 33 games against the Gators. Their 38-28 win in 2016 – the last Vols victory in the series – broke up a run of 11 straight Gators wins. Florida has won the last two games, including a 47-21 rout last September in Knoxville.

Pruitt believes his team can learn from that loss in which the Vols couldn’t seemingly hang onto the ball, but doesn’t think there will be any kind of hangover from last season.

“Well hopefully we learned a lesson that if you turn the ball over six times, it’s hard to win,” Pruitt said. “So, last year’s game will have no bearing on this year’s game. We’ll have a good plan. We got to get our guys ready to execute the plan, play the right way and do it for 60 minutes.”

Following the Gators game, things do not get any easier for the Vols. After a bye next weekend, Tennessee returns home to host No. 3 Georgia and then travels to Tuscaloosa to take on No. 2 Alabama on October 19.

Other NCAA action on TSN this Saturday: