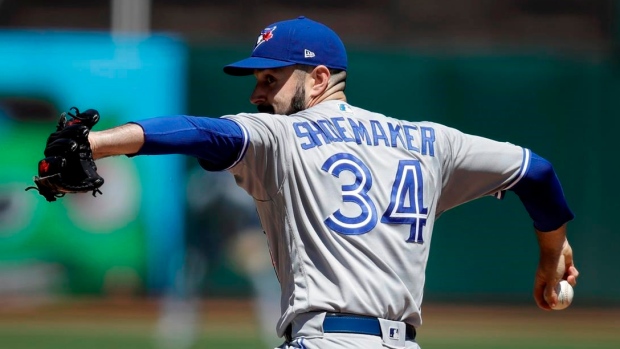 TORONTO — The last time a Toronto Blue Jays pitcher tore his ACL and was ruled out for the season, Marcus Stroman defied the odds and authored a storybook comeback.

There will be no miracle this time around for Matt Shoemaker.

But there will be a decision for Jays general manager Ross Atkins to make on the oft-injured right-hander heading into his age-33 campaign.

Signed to a one-year, $3.5 million deal in December, Shoemaker is still arbitration-eligible and, therefore, under team control for 2020.

Despite the lost 2019 season, Shoemaker will be in line for a raise via the arbitration process, one the Los Angeles Angels didn’t feel he was worth last winter, leading to a non-tender, which set him free and allowed the Jays to buy low.

That number is expected to be in the range of $5-plus million, maybe a tad pricey for a player who has made just 12 starts combined over the past two seasons, and just 26 starts since 2016.

But nothing’s stopping the two sides from agreeing to a deal similar to the $3.5-million pact Shoemaker this past winter, and pencilling him into the 2020 Blue Jays rotation once again.

After all, there’s much more certainty surrounding Shoemaker’s ability to bounce back from a torn up knee than there was with a long, murky history of elbow and forearm issues.

Pitching coach Pete Walker is a supporter of the idea.

“I’m not privy to the business side, but he’s certainly a guy that showed a lot in the short amount of time he was with us, not just leadership but a quality body of work, as well,” Walker said. “I thought he was headed to the all-star game the way he started out the season, and he could’ve potentially been there. His split was tremendous, I thought the velocity he showed was better than expected, his command was great, and I thought he dominated some really good big-league hitters.

“It was an extremely disappointing injury for him and for us.”

Back in the Blue Jays’ clubhouse Thursday morning after April 30 surgery to repair the left ACL he tore in an awkward rundown in Los Angeles 10 days prior to going under the knife, Shoemaker plans to spend as much time around the team as he can while he rehabs.

“I want to be here as much as I can, as much as they allow me to be here,” said Shoemaker, wearing a large brace on his left knee and needing the help of crutches. “It means a lot to be around this team and just the guys. Along with just checking in with our training staff, with our people, and doing treatment and doing rehab.”

Stroman has already been a resource due to the similar nature of the injuries, but the timing — Stroman’s ACL injury happened in March of 2015 — is much different.

“Stro’s been great, I’ve been talking to him,” Shoemaker said. “Same thing, left knee ACL as a pitcher. Just kind of what to expect. Stuff that helped you, stuff that didn’t help you. There’s been a lot of good conversation.

“Just given the timing of it, being the end of April, five months puts you through the end of the regular season right there, anyway. But either way, we’re being as aggressive as we can be, safely.”

If there’s a silver lining, maybe the rest will help Shoemaker’s right arm bounce back even stronger in 2020, but the unfortunate part of the ill-timed knee injury was just how good he looked through five starts.

While his 1.57 ERA across 28.2 innings in a Blue Jays uniform was part smoke and mirrors thanks to a .183 BABIP, he looked the part of mid-rotation starter, which is exactly what the front office hoped they were getting when they took a chance.

“I think the main thing is his arm feels great,” Walker said. “Once his knee’s healthy, he should be right back to where he was. His arm’s fresh, his arm’s strong and he’s got a clean bill of health there, so I think it’s just a matter of getting his knee back in working order and I expect him to have a big year next year.”​

If healthy, Shoemaker is a legit big-league starter that gets better than average results.

The Jays sorely lack in the big-league starter department, which makes a Shoemaker reboot in 2020 sort of a no-brainer.