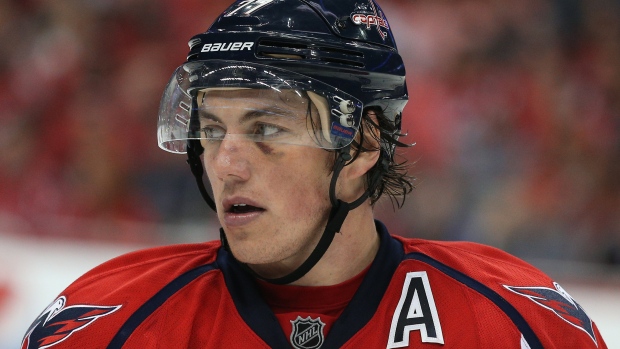 According to TSN Hockey Insider Pierre LeBrun, San Jose Sharks forward Joe Thornton is not expected to face discipline for his hit which knocked Washington Capitals forward T.J. Oshie out of Monday's game.

The league obviously looks at everything but I don't believe there's anything coming discipline-wise for Joe Thornton for the hit on T.J. Oshie

Oshie left his team's 4-1 win during the second period with an upper-body injury after the hit from Thornton.

The play started when Oshie hit Logan Couture along the boards in the Sharks' end, Oshie then dropped to the ground as Thornton's right hip collided with his head.

"He was just falling a little bit," Thornton said after the game. "It's not like I ran him or anything. I bumped him and it felt like my hip kind of hit him in the head. So it's just unfortunate what happened."

Oshie left under his own power and did not return for the third. The team announced that he will be re-evaluated Tuesday.

Capitals forward Tom Wilson fought Thornton in the third period as a result of the Oshie hit.

"He's [Thornton] what's good for the game, and in that instance, that hit, I didn't like personally and I don't think our team liked," Wilson said. "Any times a guy is down, it's kind of a no-hit zone."

Sharks head coach Pete DeBoer was not happy Wilson took to the ice looking simply to take on Thornton.

"I think our group appreciated the fact you've got a 38-year-old Hall of Famer out there that's basically forced into that by their coaches and their bench," said DeBoer, who also called the fight premeditated "garbage."

Thornton received a $5,000 fine for slashing on Sunday from the league's Department of Player Safety.