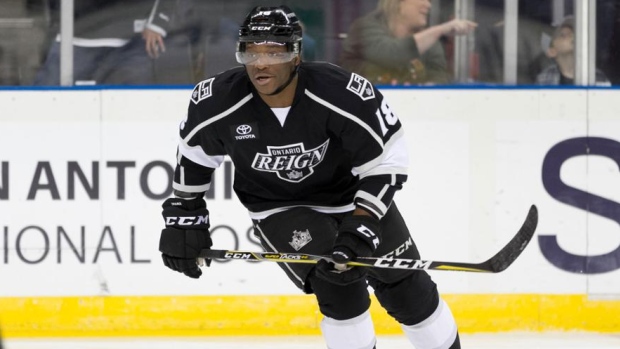 ONTARIO, Calif. — Ontario Reign forward Boko Imama says there is "no excuse" for the racial slur that was directed at him during a recent American Hockey League game.

Imama made his first comments since the AHL suspended Bakersfield Condors defenceman Brandon Manning five games for using a racial slur in an altercation with Imama during Ontario's 3-0 win over the visiting Condors on Monday.

"What happened is unfortunate for everyone," Imama said in a statement. "No matter how intense or heated a game gets, there is no room for this in our game and no excuse. I am very proud to be an African Canadian hockey player and to stand for all other players that are in the same situation as me."

Imama, born in Montreal to parents who immigrated from Democratic Republic of Congo, also thanked the Los Angeles Kings and Edmonton Oilers organizations for helping handle the situation. Ontario is the AHL affiliate of the Kings, while the Condors are attached to Edmonton.

Manning, a 29-year-old from Prince George, B.C., was assessed a game misconduct at 5:57 of the second period on Monday's game after using a slur during an incident that saw both players assessed roughing minors.

Manning apologized in a statement on Tuesday.