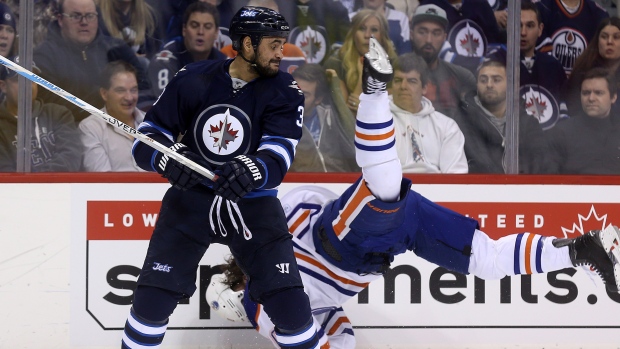 Winnipeg Jets defenceman Dustin Byfuglien will not be suspended after an elbow to the head of Montreal Canadiens forward Brendan Gallagher.

Byfuglien had a hearing with the National Hockey League Department of Player Safety on Tuesday and was informed that no further discipline was forthcoming.

The hit in question occurred late in the first period of the Jets’ 5-1 loss to the Habs on Sunday night. Byfuglien was assessed a two-minute minor for elbowing. Gallagher remained in the game.

Under the current collective bargaining agreement, Byfuglien would have been considered a “repeat offender." The 30-year-old Minneapolis native was suspended for four games late last season for cross-checking JT Miller of the New York Rangers.

Byfuglien for his part was unimpressed with the possibility of a suspension earlier on Tuesday.

"In the case they are looking at right now, I play a puck and have no intention to try and hit him," Byfuglien said in a scrum on Tuesday afternoon. "I'm trying to go up ice on a delayed call and you know, I get the shit end of it."

TSN Hockey Insider Darren Dreger thinks the Jets Dustin Byfuglien has a suspension coming for his on the Canadiens Brendan Gallagher.

Byfuglien, 30, is in his 11th NHL campaign and sixth with the Jets organization. A three-time All-Star, Byfuglien has appeared in 12 games this season, tallying a pair of goals and four assists. He has accrued 18 minutes in penalties and averaged 22:34 a night in ice time to lead the team.

The Jets are next in action on Wednesday night when they visit the Toronto Maple Leafs.