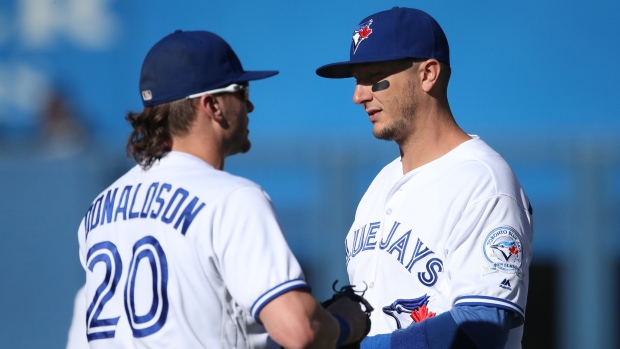 Injuries have been a theme for the Toronto Blue Jays in the first half of the season, and it looks like the club is going to have to do some more waiting on some of their key pieces.

Manager John Gibbons spoke to reporters Friday as the club returned from the All-Star Break and said that Josh Donaldson and Troy Tulowitzki are both still without timetables for their return. Donaldson is progressing through a running program and Tulowitzki has been running and doing baseball activities for a while now, but neither are close to a return to the club. Tulowitzki has not played yet this season because of bone spurs in both of his heels and Donaldson has been on the disabled list since June 1 with a left calf injury.

Josh Donaldson is still progressing through a running program but no timeline for a return. #BlueJays

Aaron Sanchez (finger) is in Dunedin playing catch but still hasn’t returned to a mound. Marco Estrada (left glute) is throwing a bullpen Friday and is expected to be ready to come off the DL to make his start on Monday. Danny Barnes (left knee) is expected to throw live batting practice Saturday and will be re-evaluated for a potential rehab assignment next week.

Kevin Pillar will be in Toronto over the weekend and then be re-evaluated as he works his way back from an SC joint sprain he sustained while making a diving catch against the Boston Red Sox. It was originally expected that Pillar would miss four to six weeks.

Shortstop Lourdes Gurriel Jr. did some running Friday but he’s still going through concussion protocol as a result of a collision with Boston starter Eduardo Rodriguez at first base. He is eligible to return Saturday.

The Jays will begin the second half at home Friday night against the Baltimore Orioles.