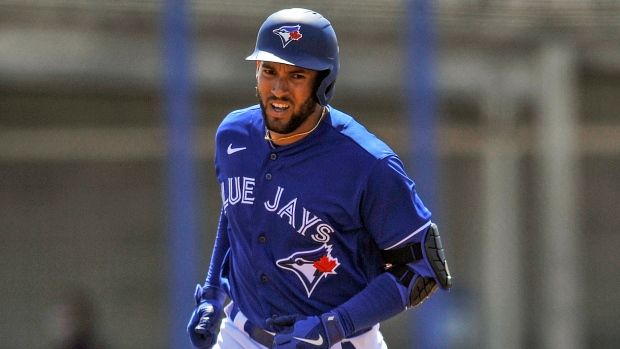 George Springer has yet to make his Toronto Blue Jays debut and based on an update from manager Charlie Montoyo on Tuesday, it doesn't look like that will come any time soon.

Teoscar Hernandez tested positive for Covid-19 and will be sidelined for what Charlie Montoyo says is a 10 day quarantine and go from there. Mild symptoms but getting better.

Montoyo said the injured outfielder will not join the Blue Jays to start their nine-game road trip and will instead receive alternate training site at-bats. There is still no timeline for his return.

After starting the season on the injured list because of a Grade 2 oblique strain, Springer is currently dealing with a quad injury he incurred last week while running. The Jays never announced when Springer would have made his return, but indications were he was close to game action before the quad issue popped up.

The 31-year-old appeared in 10 spring games before injuring his quad, hitting .240 with one home run and two RBI.

He signed a six-year, $150 million deal in the off-season to join Toronto after spending the first seven seasons of his career with the Houston Astros.

The Blue Jays also announced Tuesday that outfielder Teoscar Hernandez tested positive for COVID-19. He will be unavailable for a minimum of 10 days.