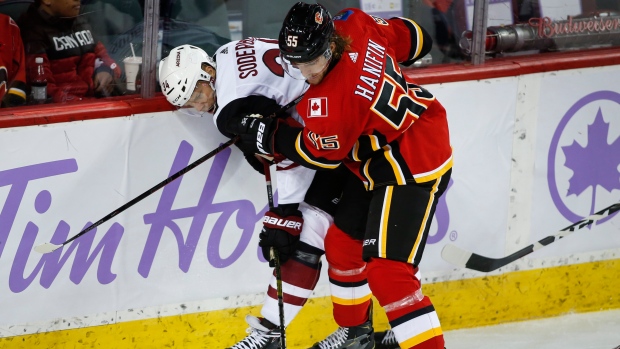 CALGARY — Propelled by Noah Hanifin's biggest game as a Flame, Calgary turned in its most complete effort of the season.

Hanifin had a goal and two assists on Thursday, and the Flames scored four times in the second period en route to a 5-2 victory over the New Jersey Devils.

Hanifin's first three-point game as a Flame — and the fourth of his career — came on a night in which coach Bill Peters had made major changes to his defence pairings, including separating Hanifin and Travis Hamonic, who had been his main partner since Hanifin arrived from Carolina via trade two summers ago.

"Sometimes it's good to freshen things up a bit and play with someone new," said the 22-year-old Hanifin. "Things were running a little stale for a bit so I thought that helped tonight."

Having Hanifin and Hamonic separated caused a good-natured stir in the Flames dressing room.

"All the guys were calling us 'The Inseparables,'" said Hanifin with a chuckle. "Tonight we were separated so we were getting it from the guys tonight. But I thought he was great with (Giordano) tonight and I thought me and (Rasmus Andersson) had some good success, too."

The changes, which also saw TJ Brodie drop to the third pairing, where he played with Michael Stone — a healthy scratch the last seven games — resulted in the club's most complete 60-minute effort.

"That was a big step for our team to play a whole, solid 60 minutes. I don't know if we've done that at all," Mickael Backlund said.

Now the Flames are hoping to build off of Thursday's win.

"We've been talking about how we need to play with a little more swagger, a little more confidence," said Flames centre Derek Ryan, who scored the first of the second-period goals. "I think a win like that, not only the score, but dominating and controlling the play, that can build our confidence."

Hanifin's points came on three consecutive goals after Nikita Gusev had one-timed a Jack Hughes set-up to give the Devils a 2-1 lead at 5:21 of the second.

On the tying goal at 9:57, Hanifin showed patience and poise in carrying the puck from the blue line along the sideboards, then around the back of the net, before centring a perfect pass to Monahan, who one-timed his fourth of the season. It was just the second goal in 17 games for the perennial 30-goal scorer.

After assisting on Backlund's go-ahead goal at 14:53 on the power play, which was accidentally deflected into his own net by Devils captain Andy Greene, Hanifin scored the back-breaker with 14 seconds left in the second. On a power play, his shot from the blue line beat Blackwood, who was screened by Milan Lucic.

"We had a pretty good first there. The second, once again, we started trying to play a little too much east-west instead of a north-south, direct game like we've been doing quite well here lately," said Greene. "We didn't sustain enough pressure in the offensive zone. We were kind of one-and-done."

Johnny Gaudreau also scored for Calgary (10-7-2). Elias Lindholm had an assist to extend his point streak to nine games (5-6-11).

The Flames won their second straight to open a four-game homestand and improved to 6-1-1 on the season at the Scotiabank Saddledome.

Hughes had the other goal for New Jersey (4-6-4) for a two-point night. Taylor Hall had an assist to extend his points streak to seven (1-8-9).

The Devils fell to 2-1-0 on a five-game road trip, which continues Friday night in Edmonton.

"We just got away from our game," said Hall. "It wasn't a good effort by us. It seemed like we were disconnected all over the ice. We really fed into their attack."

Rittich made 21 stops to earn the win. Mackenzie Blackwood, peppered with 38 shots, suffered the loss.

Notes: Hughes has nine points (four goals, five assists) in his last eight games... The game featured the two teams in the NHL that started the night with the most games played (Flames, 18) and the fewest games played (Devils, 13)... Flames D Michael Stone returned to the line-up after being a healthy scratch the last seven games..

Note to readers: This is a corrected story. A previous version spelled Backlund's name incorrectly.