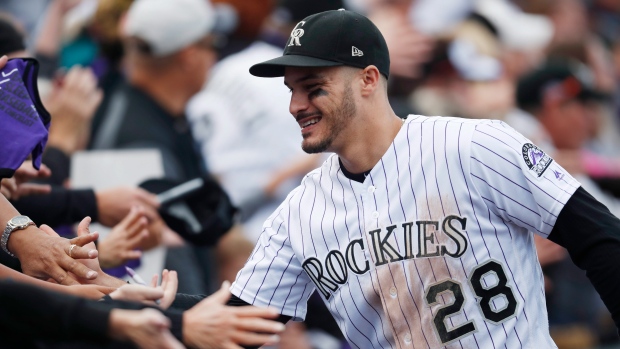 In a text message to MLB.com, the 28-year-old expressed his displeasure with his treatment by the team.

Nolan Arenado to MLB-dot-com on #Rockies: “There’s a lot of disrespect from people there that I don’t want to be a part of. You can quote that.” https://t.co/fNAoFht0YF

“There’s a lot of disrespect from people there that I don’t want to be a part of,” Arenado said in a text to MLB.com. “You can quote that.”

Rockies general manager Jeff Bridich told the Denver Post on Monday that the third baseman would be a member of the team when Spring Training begins, bringing to an end an entire off-season of trade rumours circling the five-time all-star.

“With the season coming up and spring training on the horizon, we are going to start focusing on that,” Bridich told the Denver Post. “We have listened to teams regarding Nolan and really nothing has come of it. We are going to move forward pretty much as we expected — with Nolan in the purple and black and as our third baseman.

“So we can put this to bed and collectively look forward to the upcoming season and work toward that.”

Arenado was not satisfied with Bridich’s comments, prompting him to respond in text messages to MLB.com’s Thomas Harding.

“You ask what I thought of Jeff’s quotes and I say I don’t care what people say around there,” Arenado told MLB.com in a text. “There is a lot of disrespect.”

After posting 41 homers and 118 RBIs with a .315 average during the 2019 season, Arenado’s name had been linked with the Texas Rangers, St. Louis Cardinals, Atlanta Braves and other MLB teams in trade rumours.

His contract includes an opt out after two more seasons.