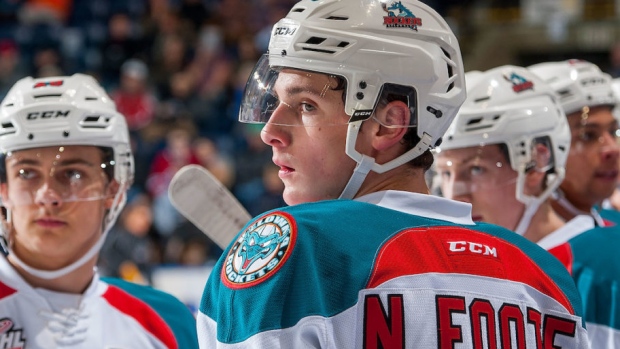 After staying off the ice Thursday, Team ​Canada resumes its World Junior Summer Showcase schedule with a game Friday against Sweden at 1pm et/10am pt on TSN1, TSN3, TSN4, and TSN5.

The name is familiar, but the position is not.

Nolan scored a goal and added two assists in Canada's opening game at the World Junior Summer Showcase. He'll continue his audition for a roster spot on Friday against Sweden. ​

Nolan, who like older brother Cal is a first-round pick of the Tampa Bay Lightning, says growing up in a hockey family helped stoke his competitive fire.

"It was awesome. With Cal being a defenceman I was always going up against him one-on-one and learning from him, learning what defencemen do and stuff like that. We were really close. We were always going hard against each other and battling hard in mini sticks or on the ice and I was fortunate to play a little bit of lacrosse with him as well."

Did Cal ever take it easy on him?

"No, he definitely took advantage," Nolan said with a grin. "He never let me have anything easy and that’s good. It pushes me, because you're obviously going to experience that strength when you’re older. He’s two years older, so he was strong and it was fun."

Nolan enjoyed watching Cal represent Canada at the 2018 World Juniors in Buffalo, with one play in particular standing out. During a game against Slovakia, Cal dove to knock the puck off the goal line with his glove.

Oh my god what a save by Cal Foote pic.twitter.com/GzjXLTYmn7

"I remember that pretty clear," Nolan said. "That was the 1v1 Ram champ [on SportsCentre] for a long time. He's given me lots of advice. Even his first two years, he was there in camps so he told me what to expect, how to prepare for it, the stuff you need to do."

Cal won a gold medal at the World Juniors, which was only the latest international triumph for the family. Adam won titles with Canada at the 2002 Olympics and 2004 World Cup. Nolan hopes to add to the family trophy case this year.

"It'd be awesome to continue to follow in their footsteps and wear the maple leaf," he said.

Serron Noel supplied two of Canada's three goals during Wednesday's 8-3 loss to Finland. On his first tally, the Florida Panthers second-round pick in 2018 gained the blueline with speed before making a shifty move in the slot.

"Confidence is really the big key here," he said. "Maybe last year I wouldn't have wanted to try that little toe drag there, but now I'm confident and aware of all my skills and my skill set."

Noel has good reason to feel confident after scoring 34 goals and adding 47 assists in 68 games with the Oshawa Generals last season. Those 81 points represented a significant increase over the 53 he produced in his draft year.

At 6-foot-5, Noel is already a hulking presence on the ice, but he believes that size can be even more of an advantage moving forward.

"I really want to get bigger and stronger," he said. "I think that will really improve my game, being able to hold the puck in the corners a little bit longer and make some plays, keeping off the defenders."

The Ottawa native will get another big chance to impress Canada's coaches on Friday as he starts on a line with Foote and Ryan Suzuki. Bringing a high level each and every game is something the Panthers have stressed.

"Work on my consistency and bring that overall power-forward game every night," he said when asked what the message was from his NHL team. "They want me to key in on that consistency level."

Olivier Rodrigue stumbled out of the gate last season in the QMJHL going 3-4, with an .882 save percentage with Drummondville. He was also struggling off the ice.

"Even at school it was a little bit hard," the Oilers second-round pick in 2018 revealed. "I came back from Edmonton and it was hard at school because I missed five weeks so that was bugging me a little bit."

Faced with that adversity, Rodrigue had an epiphany.

"When something's not going your way, you have to talk about it and that made the difference," he said. "Talked to my family, my coaches, my agent. I was holding the stuff inside me so I was a little bit shy to talk about it."

After opening up, Rodrigue was able to start feeling like himself again and his game returned. He finished tied for the league lead with 35 wins. He started strong at the World Junior Summer Showcase this week, stopping all 17 shots faced against the Americans on Tuesday.

"He looked composed," said Oilers vice-president of player development Scott Howson. "He looked focused, he looked calm. He was athletic when he had to be athletic, so that was a really positive start in what I would suspect is a wide-open goaltending scenario for Canada."

Rodrigue may have the inside track in the race to be Canada's starter because he has more international experience than the other goalies here, including Peterborough's Hunter Jones, Rimouski's Colten Ellis and Halifax's Alexis Gravel. Rodrigue played the majority of games for Canada at last year's under-18 world championship in Russia, posting the tournament's best save percentage, and won a gold medal at the 2017 Hlinka summer event.

"He's really positionally strong," said Mark Hunter, part of Hockey Canada's management group. "He's always in the right place where the puck's at and he comes out at the right time. He's got real good hockey sense for a goalie and I've liked what I've seen. He was a high pick to Edmonton and there's a reason why he was that high."

Rodrigue was disappointed not to get invited to Canada's selection camp last December, but believes he's well positioned for a run this year.

“I got stronger," the 6-foot-1 Chicoutimi, Que., native said before breaking into a smile. "Obviously, I didn’t get bigger, but I did a good job to get stronger and more powerful."

"He's been a high-pedigree guy, who was a high pick in the Quebec league," said Howson. "Just got traded to Moncton, so we'd be really excited to see him take that step and feel that pressure of playing for Canada at the World Juniors."

Nick Robertson stole the puck from Jonatan Berggren before beating goalie Jesper Eliasson with a beautiful deke in Team USA's win against Sweden on Wednesday.

"He [Berggren] was on his left side," Robertson said. "His shoulders were facing that direction and if he cuts to his left I could easily poke-check it, or if he’s going to pass I can get in his way, so I knew I was going to try and strip it from him. It was the end of the shift with two guys changing so tried to make something out of it. I just put my stick out, took a couple strides and it went off my shin pad luckily, and as I went in on the goalie I knew what I wanted to do. The ice was kind of choppy so I had to be careful how I executed it."

Robertson, Toronto's top pick in June's draft [second round], executed it flawlessly, which is no surprise considering how long he's been doing the move. The goal went down as unassisted, but Robertson said the family of his linemate Alex Turcotte deserves some credit.

The goal was the latest highlight in a whirlwind summer for the Peterborough Pete.

"Toronto, the media is crazy there, and with my ethnic background, being Filipino, a lot of reporters who are Filipino came up to me and people have been messaging me about how much it meant and I still can't believe I'm in Toronto," he said with a smile. "This past month and a half or so has been very crazy from the draft, development camp, training with the Leafs and now the World Junior Summer Showcase, so it still hasn't kicked in yet."

Robertson, who grew up a short drive from USA Hockey Arena, has been training at the Leafs facility this summer and has enjoyed rubbing shoulders with the likes of John Tavares and the newly signed Jason Spezza.

"They treat you like you're on the team and you definitely have to mature very quick," he said, "definitely a business mentality there. It's crazy. Tavares, Spezza, you just hear as a kid what they do and when I actually got there and I saw Tavares there. He's big, like massive, with strength and his glutes, everything is massive and he's a very nice guy. Spezza, I remember, first day I walk in and he's already there and has a heart rate monitor and [pushing] himself on the ice and I'll try to do that when I get back there."

But before he returns to Toronto, Robertson will look to continue to impress the Team USA coaching staff. Despite not turning 18 until September, Robertson has made an impression.

"He's been pretty good," head coach Scott Sandelin observed. "He's bringing that energy and he competes. He's been a pleasant surprise for me because I haven't really seen him. Good in the locker room, good on the bench, but I just like the way he goes out and plays every shift."

Toni Utunen gets a bit sheepish when asked about his overtime goal against Canada in the quarterfinals of last year's World Juniors.

"To be honest, I don’t remember too much," the defenceman said. "I just remember that after I scored all the screaming and yelling. That’s all I remember of that goal."

The goal paved the way for Finland to make a run to the gold medal, the country's first on the smaller ice surface in North America.

"We made history," the Canucks prospect says with a great deal of pride.

A year later, Utunen hopes to play an even bigger role for his national junior team. He served as captain of an under-18 team that won the gold medal at the World Championship and is a leading candidate to be the go-to leader in the Czech Republic this holiday season.

"I wish I could be captain and show examples for the guys, show we can do it," he said.

"He’s a captain calibre type of player," said former NHLer Tuomo Ruutu, who is an assistant coach for Finland at the World Junior Summer Showcase. "He was a captain in under-18s and one of the leaders last year as well as an underage. He leads by example on the ice."