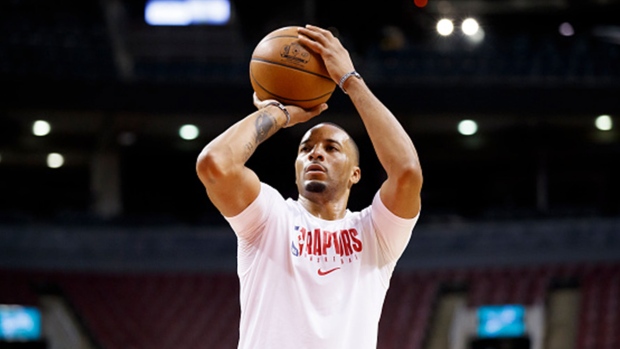 TORONTO — Norm Powell has been sidelined for 20 Toronto Raptors games this season with two different injuries.

But the toughest to watch was Tuesday's 108-97 loss to the league-leading Milwaukee Bucks.

Powell, who fractured a finger on his non-shooting hand on Jan. 31 in Detroit, was finally cleared to practise on Thursday, and is listed as questionable for Friday's game versus the visiting Charlotte Hornets.

Marc Gasol remains sidelined with a hamstring injury, but was able to do some light work at practice Thursday.

"So he's making progress, but he's still out," Nurse said.

Meanwhile, centre Serge Ibaka has been ruled as questionable for Friday's game with right knee soreness. Ibaka missed 10 games with an ankle injury earlier this season, and another with flu-like symptoms earlier this month.

Ibaka has been excellent this season but struggled in the loss to Milwaukee, shooting an abysmal 2-of-15.

The Raptors boast the third-best record in the league (42-16) despite missing several key player for large chunks of the season. And Powell will be a welcome addition ahead of a tough five-game road trip that begins Sunday in Denver. They'll play at Phoenix, Golden State, Sacramento and Utah before returning home.

Powell, who'd been playing some of the most consistent basketball of his career before the injury, said he'd been pushing the Raptors' medical staff to let him play virtually "since I got hurt."

"Just to wrap it or whatever to get me back out there," Powell said. "But they've always told me to calm down and trust them in what they do so I'm not gonna force their hand and try to get them to get me out there unless I'm ready to go."

Powell said he was fortunate that it was a finger injury, so he's been able to do plenty of cardio work in his time away. He's also studied a ton of game film.

"Just staying with it and trying to digest as much basketball as you can, talking to the coaches, different things like that," he said. "And just working on weaknesses. I can't do (much) with my left, but working on tightening up my handle with my right, passes, things like that. And where I can get better reading the second and third level of the defence. That's how you get better."

He missed three weeks earlier in the season with a shoulder injury, but despite the injury setbacks has been pleased with the progress in his game.

"I think the season has been really good for me, for the team," the 26-year-old said. "Just the way the approach is for all of us going out there and competing. Honestly, I haven't really looked at the injuries and these setbacks as something negative. I see it as just an opportunity to get better in other ways. I think that just comes with the growth of my mental approach to the season and my play — through good games and bad games, whatever it is — just staying even-keeled and focused on what I'm trying to achieve and what the team is trying to achieve and not getting outside of that.

"It's all about staying calm and staying in the moment and that's what I've been doing."