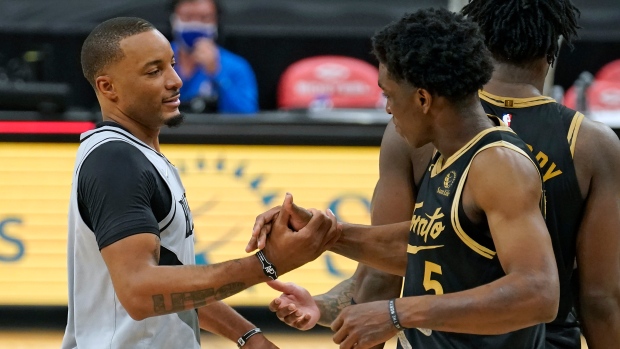 TORONTO – The Toronto Raptors were down by 13 points going into the fourth quarter of a pivotal Game 5 in their first-round playoff series with the Indiana Pacers back in April of 2016.

With the best-of-seven tied up at two games apiece, and the underdog Pacers threatening to take control, the season was on the line for the second-seeded Raptors. There was even more at stake, though.

Toronto had failed to make it out of the opening round in each of the previous two seasons – losing to Brooklyn in a thrilling seven-game series in 2014 and getting swept by Washington a year prior. By record, they were the favourites in both of those series, so this was a familiar feeling.

The franchise had never won a best-of-seven playoff series. Coming up short again would almost certainly prompt significant off-season change. The head coach, Dwane Casey, was very much on the hot seat and it’s unlikely that the all-star tandem of Kyle Lowry and DeMar DeRozan would have survived another post-season collapse.

Inexplicably, Pacers coach Frank Vogel had his two most important players, Paul George and George Hill, on the bench to begin the final frame, and the Raptors took advantage and went on a run. They chipped away at their deficit, and with six and a half minutes left they tied the game on what remains one of the most iconic plays in team history.

Using a Myles Turner screen, George turned the corner on Raptors rookie Norman Powell. Monta Ellis threw him the ball, but Powell read it perfectly, picked off the pass and had a clear path to the basket, where he threw down a one-handed slam dunk, later admitting that he nearly bobbled the rock on the way up.

‘That's gotta be one of the top five repeated highlights,” said Nick Nurse, who was an assistant on Casey’s staff that season. “If you're just sitting around in Toronto and flipping channels you’ll see Norm poke the ball away and go down and dunk that one. That one you've seen probably a few times in your life if you're a sports fan in Toronto. That was a great moment for him and a great game, obviously from him as well, taking steps forward.”

Less than 10 months earlier, the UCLA product was selected 46th overall in the second round of the 2015 draft, via a pick from Milwaukee. He spent some of his rookie season in the D-League before an injury to DeMarre Carroll – Toronto’s prized off-season signing – created an opportunity.

Now here he was, bringing a home crowd of more than 20,000 to their feet and endearing himself to a long-suffering fan base that had been waiting a long time for moments like this.

Powell played the entire fourth quarter of what turned out to be a 102-99 victory for the Raptors. They would go on to win the series in seven games and, eventually, advance to the Eastern Conference Finals for the first time in their existence.

Without Powell’s heroics and without that fourth-quarter comeback, who knows? The Raptors would have fallen behind 3-2 and likely gone on to lose that series. After that, there’s a good chance that core would’ve been dismantled, or at least altered significantly, thus bringing an end to the We The North era three years before they’d end up winning a championship. Instead, the greatest run in franchise history continued on, and to this day, Powell’s fingerprints are on all of it.

It’s been an emotional week for the 27-year-old guard-forward, who was sent to Portland in the deal that landed the Raptors Gary Trent Jr. and Rodney Hood ahead of Thursday’s trade deadline, and then faced his former team three days later.

It was an unusual twist of fate, to say the least. Jonas Valanciunas had to wait a year and a half to play Toronto after being traded to Memphis in 2019 – that’s just the way it shook out with the scheduling and that first meeting with the Grizzlies being pushed back because of the hiatus. Marc Gasol and Serge Ibaka, who both left in free agency last fall, won’t have their Raptors reunions until early-April and the beginning of May, respectively.

With the Trail Blazers in the middle of a four-game road trip, Powell still hasn’t been to Portland or even left the state of Florida since being dealt. On Thursday, he drove straight from Tampa to Orlando, where he joined his new team and scored 22 points in his debut the following evening – a 112-105 win over the Magic. He drove back to Tampa after the game, slept in his own bed, and then took a familiar route to Amalie Arena for Sunday’s contest. Roughly 72 hours after packing a bag and saying his goodbyes, Powell was back to take on the team he spent his first five and a half NBA seasons playing for.

It felt strange from the jump, literally. As the teams were getting set to tip-off, Powell lined up next to the Raptors on the wrong side of the court – old habits die hard, as they say.

“It was really weird playing against him,” Fred VanVleet said following a 122-117 loss to Powell – his former teammate and good friend – and the Blazers.

Powell was in early foul trouble, limiting him to just 27 minutes, and had a quiet night by his standards, scoring 13 points on just six shot attempts. He was on the wrong end of a poster, with much-maligned centre Aron Baynes dunking on him in the second quarter, and then missed two free throws late in the fourth – proceeding to tear the top of his new Blazers jersey out of frustration.

Even on an off night, he had a vintage Powell moment in the third quarter. Stealing the ball from Trent, the player he had just been traded for, the newest Trail Blazer went in for the dunk in transition – reminiscent of that memorable play from his first post-season run. On his way down the court he gave the Raptors’ bench a quick stare.

“I thought he was looking at me, but he said he wasn’t,” VanVleet joked. “I said ‘I didn’t trade you, man, I don’t know why you mad at me for.’ Norm’s such an emotional guy, in a good way. He wears his heart on his sleeve and it was good to see him.”

Powell admitted he was caught a bit off guard when he got the news on Thursday, even though he knew the trade was a possibility. He said he was able to hold it together, emotionally speaking, until the goodbyes started.

“When I ran into [assistant coach] Jama [Mahlalela], Jama was the first coach I was tied to when I got to Toronto, that's when the emotions came out about what actually happened,” Powell said on Friday. “After that, I was very emotional seeing everybody.”

He’s landed in a good spot. In three days with the 28-18 Blazers – who are fifth in the Western Conference – Powell has won as many games (two) as he did in the previous 32 days with the 18-28 Raptors. On Sunday, he started alongside Portland’s dynamic backcourt duo of Damian Lillard and C.J. McCollum. Together, they’ll form one of the most lethal scoring trios in the NBA.

The new surroundings are going to take some getting used to, though. Powell was the Raptors’ second-longest tenured player and remains one of the franchise’s great success stories.

He’s had his ups and downs through the years, to be sure. He’s battled injuries, bounced between roles, and – until recently – performed inconsistently at times. However, through hard work, professionalism and a commitment to getting better, the 27-year-old has blossomed into one of the league’s very best and most efficient scorers at his position.

“As much as we try to develop players and make players better, Norm made himself better,” said Raptors president Masai Ujiri, shortly after completing the trade on Thursday. “You see where his game went and the level he took it to.”

“He was a great Raptor and a great dude,” Nurse added. “I loved coaching him. I understand it's part of the deal here but I wish him nothing but the best. I think he's headed for an amazing summer. Amazing, right? Beyond probably anybody's wildest dreams five or six years ago. But not his, probably, because he really worked and he's gonna deserve it.”

With his breakout campaign, Powell played himself out of the Toronto’s long-term plans. He’s going to opt out of his current contract in the summer and command a new deal worth upwards of $20 million annually. Somebody is going to pay it, but it wasn’t going to be the Raptors, which is why they were determined to move him ahead of the deadline – and they got a younger and cheaper prospect that they like in Trent Jr.

Still, Powell’s Raptors legacy will live on long past his tenure. He left his mark on the organization, made a strong impression with the fans from the moment he threw down that franchise-altering dunk, and connected with the city and country both on and off the court. The feeling is mutual.

“The thing I'm gonna miss most is the city,” Powell said the other day. “Toronto was the start of everything, truly embraced who I am as a player. All the memories, all the connections and relationships I created over my time there in the organization… Definitely gonna miss the city and the fans and the organization. Just the whole vibe of Toronto was amazing.”​