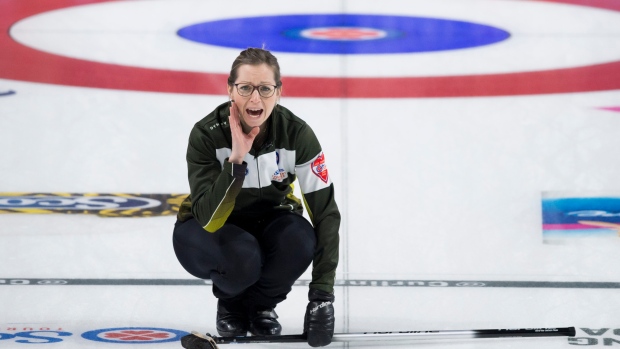 MOOSE JAW, Sask. — Protective of their curl-life balance, Krista McCarville and her Northern Ontario team build their season around peaking for the national championship.

The Fort William Curling Club foursome from Thunder Bay, Ont., doesn't play in as many World Curling Tour events as some of the big names in women's curling do.

That hasn't hampered them at the Scotties Tournament of Hearts. McCarville skipped Northern Ontario to the playoffs for the fourth time in her career.

With a 6-5 win over Prince Edward Island on Friday, Northern Ontario earned the fourth and final spot in Saturday's Page playoff.

McCarville allows herself to imagine wearing defending champion Team Canada colours at next year's Tournament of Hearts in her hometown of Thunder Bay.

"There's always those thoughts, but there's still three really big wins that we need to get there, so we don't want to get ahead of ourselves," the 37-year-old skip said.

McCarville capped the championship round with an 11-6 win over Jones on Friday night, but Jones was already assured a top-two finish in the standings.

"We knew where we sat," the six-time Canadian champion said. "We were a little bit flat. It's good to get some of the bad shots out before heading into the playoffs.

Einarson and Jones will meet in an all-Manitoba playoff Saturday evening between the first and second seeds respectively.

Jones, Einarson and Homan are all 1-1 against each other. The tiebreaker went to the cumulative measurements of the draw-the-button which precedes each draw.

Einarson will start Saturday's game against Jones with last-rock advantage.

The loser drops to Sunday's semifinal to face the winner of Saturday afternoon's Battle of Ontario between Homan and McCarville.

Einarson knocked Ontario to the three-four playoff game with a 9-6 win over Homan on Friday evening.

In a moment of sportsmanship, the Manitobans told Homan third Emma Miskew to re-throw a stone in the sixth end after her second hog-line violation of the game.

Both teams believed her stone's sensor was faulty, although the rock was not removed from play.

"That was a tough point to give away. We had a good setup there," Homan said. "You hope that the handles are working properly. You could see on the replay she wasn't even close to over.

"They played really well. The game didn't come down to that rock. We had quite a few we could have made a little bit better and got a few extra points."

McCarville came through the three-four game to reach the 2016 final in Grande Prairie, Alta.

McCarville, who is coached by three-time Canadian men's champion Rick Lang, is ranked 28th in Canada.

Because her team doesn't travel to many events, it doesn't rack up ranking points.

Their presence in Pool A in Moose Jaw contributed to its "pool of death" label, however.

"Basically at any Scotties that Krista McCarville is in, whatever pool she's in is going to be the harder one," Carey said. "She's ranked really low, but she's really good and we all know that."

McCarville is a teacher, third Kendra Lilly works in financial services, second Ashley Sippala is a lab technician and lead Jen Gates is a communications manager at a country club.

Both McCarville and Sippala have children.

"Right from the time we really started getting more competitive, we said 'you know what? Curling's not number one in our lives. We love curling and it's a passion. All of us want to do it, but it's not our number one,'" McCarville said.

"I have a family and they are number one to me. I love my profession of teaching, but to come out here and be able to contend it is exciting.

"We might not 'spiel as much, but we practise really hard at home. Just coming to the event, we're fresh and excited and ready. If we travelled a lot, maybe we wouldn't feel that way."

Carey will not defend her Canadian title this year. She dropped to six losses in the afternoon draw falling 9-2 to B.C.'s Corryn Brown.

"Disappointing," the Calgary skip said. "We just couldn't quite get it together. We showed flashes of it in a couple games, but couldn't produce as consistently as we needed to."