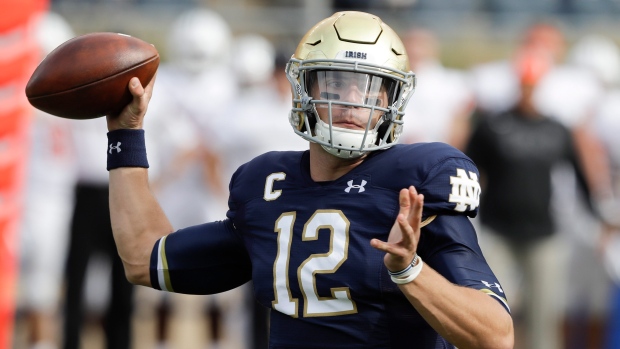 Notre Dame quarterback Ian Book is one of several notable names that could appear in NCAA bowl games this winter on negotiation lists revealed by the Canadian Football League Wednesday.

Each team revealed 10 players on their negotiation list, which can include as many as 45 players the club is given exclusive CFL rights to.

Book, who has quarterbacked Notre Dame to the No. 2 ranking this season, is on the Winnipeg Blue Bombers’ negotiation list. The senior has thrown for 2,382 yards, 15 touchdowns, and just two interceptions for the undefeated Fighting Irish this season.

And Howell, who has thrown for 3,352 yards, 27 touchdowns, and six interceptions for the No. 16 Tar Heels, is on the Ottawa Redblacks negotiation list.

The 10 players announced on each CFL team’s negotiation list are as follows: