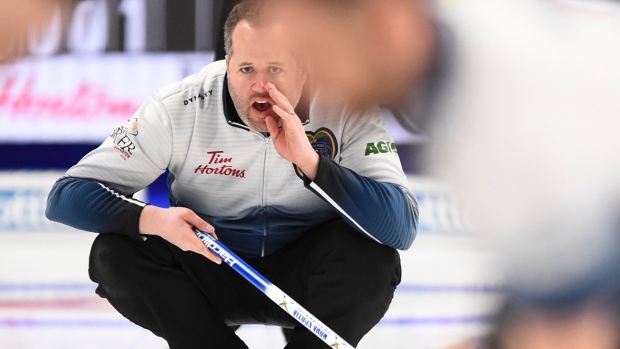 Nova Scotia became the latest province to cancel its curling playdowns Monday due to the COVID-19 pandemic. In doing so, it further stoked the debate on how best to decide on provincial representatives for the national championships in this most unusual season.

Nova Scotia was able to follow that lead for its men's team. Skip Jamie Murphy accepted the invite and will return to the Tim Hortons Brier, Jackson said.

However, the women's representative remains uncertain. Mary-Anne Arsenault, who won the 2020 Nova Scotia title, moved to British Columbia last year and curls with a new team.

The association instead turned to provincial standings in the pandemic-shortened 2020-21 season and invited the team skipped by Jill Brothers. Jackson said they've been given two days to decide.

"We were looking for an opportunity to recognize and celebrate a team that has demonstrated success this year because they have been playing this year and they have been successful," she said. "That's how we came to this decision."

The Scotties Tournament of Hearts will kick off a six-event schedule at the Markin MacPhail Centre on Feb. 20. It will be followed by the Brier, Canadian mixed doubles, men's worlds and two Grand Slams.

Arsenault, reached Monday in B.C., said via text message that she "definitely would have considering playing" with her former team for the one-off event in the bubble. Arsenault didn't get a chance to play in the B.C. playdowns as that province gave reigning champ Corryn Brown the nod after cancelling its championship.

"Mary-Anne Arsenault does not live in Nova Scotia and has not played with her 2020 team this (season) so she would not be eligible to compete for Nova Scotia," Jackson said in an email. "Curling Canada's high-performance program was consulted and the (NS) executive felt this method of selection would showcase the talent of Nova Scotia athletes on the national stage."

Brothers made her fourth career Scotties appearance in 2019. She has a slight edge on Christina Black -- Arsenault's third last season -- in the provincial standings after a handful of cashspiels this season.

Most team play opportunities have been shut down in the country due to the pandemic. The Nova Scotia men's and women's championships were scheduled for Jan. 25-31 in New Glasgow, N.S.

"We never want to cancel any event," said competition director Andrew Abraham. "However we have no choice in this case."

Abraham said criteria for determining provincial reps was sent to all competitors a few weeks ago.

However, Colleen Jones, a six-time national champ who still curls competitively in the province, said many players had limited schedules due to COVID-19 concerns, travel restrictions or smaller fields.

"Jill's team is a credible team but the idea that points decided the provincial champions when no one knew that was a rule going into the season was a bit disappointing," she said. "But Jill will be a good rep, no doubt."

Jones beat Brothers in last year's semifinal before falling to Arsenault in the championship game.

Some associations have turned to provincial finalists as representatives.

With 2020 Manitoba champ Kerri Einarson already in the field as Team Canada, Jennifer Jones got the provincial nod. In Northern Ontario, Krysta Burns accepted the invite after Krista McCarville declined due to travel restrictions, family and work commitments.

Saskatchewan's curling association could be facing a similar situation if it's unable to hold its Jan. 28-31 playdowns. Robyn Silvernagle skipped the provincial entry at the Scotties last year but has two new teammates this season.

CurlSask has yet to announce how it will determine its team if the championship is cancelled.

Alberta, meanwhile, recently scrubbed its playdowns but has yet to declare representatives. They will also have a tough call to make as Kevin Koe skipped Team Canada at the Brier last year and didn't play in the Alberta championship won by Brendan Bottcher.

A Curling Alberta competition co-ordinator said the association board planned to discuss the issue this weekend.

Jones -- who was hoping to participate in her 40th career provincials -- understands the reasons for the cancellation, but still called the news a "bit of a blow."

"The provincial is the start of the dream," she said. "I can't state how important it is because it's just everything. It's the motivation for practising all of the time and doing the work.

"It begins young and it becomes so deeply ingrained, entrenched and burned into your bones and heart that the idea of it not being played is just something I grieve, (more) and more (as) every memory of every single one of them comes up for me."