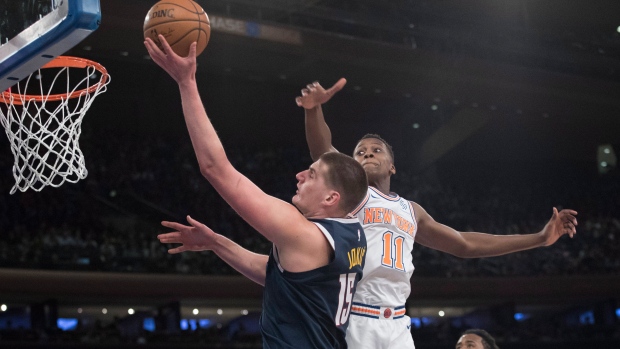 NEW YORK — A year after missing out on the playoffs by just one game, Denver wouldn't mind snatching the top spot in the Western Conference from defending champion Golden State.

At the same time, the Nuggets don't think it's the most important thing for a deep post-season run.

Gary Harris chipped in 14 points for Denver, which moved into a tie with the Warriors for first place in the Western Conference with 11 games remaining for each team.

Grabbing the top spot in the conference would guarantee coach Michael Malone's young squad home-court advantage throughout the West playoffs.

"I wouldn't say it's ultra-important. Is it something that we talk about? Sure. Is it something we say why not us? Sure. But we're not going to risk any player's health or rest at the expense of being the No. 1 seed," Malone said.

"I would much rather be a healthy, rested team going into the playoffs to give ourselves a chance to be a dangerous team in the playoffs. We're not a team that's just satisfied in making it, we want to be a team that gets in there and makes some noise."

Will Barton scored 10 of his 12 in the opening quarter as the Nuggets jumped out to a 37-18 lead one night after winning at Washington.

The Knicks made it a close game late in the third quarter, cutting the lead to seven after trailing by 14 at halftime.

Veteran forward Paul Millsap is not too worried about the No. 1 seed. His preference is a more a consistent effort on defence like he saw each time the Knicks tried to battle back before Denver answered.

"As a young team and as a team period, you got to find different ways to win. Your shot's not going to always fall. You're not always going to play great defence. But at the end of the say it's about winning games."

Former Nuggets first-round pick Emmanuel Mudiay had 21 points and rookie Mitchell Robinson added 16 points and 10 rebounds for the Knicks, who have lost their last three games and 11 of 12.

New York has lost its last three games by an average of 25 points to Toronto, Utah and now Denver.

"We're getting the hell smacked out of us," Knicks coach David Fizdale said. "These teams are just really good basketball teams."

Denver then broke away with a 15-3 spurt highlighted by seven points from Jokic and a layup from Monte Morris before time expired to extend the lead 82-62 heading into the fourth quarter.

Nuggets: Denver swept the season series from the Knicks. The Nuggets have beaten New York in 16 of their last 21 meetings. Denver outrebounded the Knicks 62-45.

Knicks: PG Frank Ntilikina played for the first time since Jan. 27 after missing 24 games due to a sore groin. He scored five points and had five assists in 25 minutes off the bench.

Knicks: Continue their six-game homestand when they host the Los Angeles Clippers on Sunday.