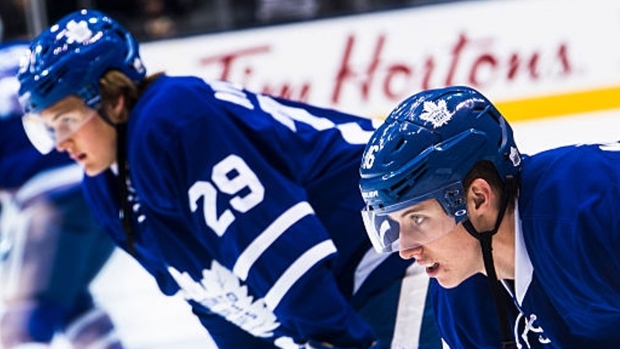 Restricted free agent William Nylander said Thursday in Sweden that he's staying out of contract talks and allowing his agent to handle negotiations with the Toronto Maple Leafs.

According to TSN Hockey Insider Darren Dreger, Nylander’s agent, Lewis Gross, has yet to drop his initial ask of more than $8 million per year on a long-term deal. He also noted that if the asking price doesn't drop, the Leafs may have to consider trading the 22-year-old winger.

"And obviously the Nylander fight continues with the Toronto Maple Leafs and our information suggests that Nylander to date is not willing to come off the number of $8-plus million per year so that makes it pretty easy for Kyle Dubas and the Toronto Maple Leafs to continue their position to dig in," Dreger said Thursday on Insider Trading. "Last week, [TSN Hockey Insider Pierre LeBrun] talked about the possibility of teams calling. Teams have been calling no doubt, inquiring about Willie Nylander, is he available?

"The Leafs are saying he’s not available, but if this drags into early November, they’re at least going to have to think about it."

Both Nylander and Leafs general manager Kyle Dubas have stated their desire to reach a long-term deal, but the Maple Leafs are believed to be looking to sign Nylander to a contract in the $6 million range. TSN Hockey Insider Bob McKenzie said Thursday on TSN Radio 1050 Toronto that he doesn't believe Nylander will get "a lot more than" David Pastrnak, who's signed at $6.66 million with the Boston Bruins.

With each day the contract negotiation drags on, Nylander stands to lose anywhere from $20,000-$45,000 per day off whatever he ends up signing for.

"Of course it's a lot of money, but in the end I must look to what is right for me and what me and my agent think is right," Nylander told Aftonbladet on Thursday. "Especially if it's a multiple year thing. I have to think long term. It's my own future."

The Maple Leafs opened their season with a 3-2 overtime win over the Montreal Canadiens on Wednesday night with Tyler Ennis filling Nylander's spot in the lineup to the right of Auston Matthews. Nylander said he didn't watch the game, but took the opportunity to state that he's not looking for a trade.

"No, but I watched the highlights this morning," Nylander said. "It was really nice goals. I want to play, but the situation is what it is.

"But I want to stay in Toronto."

Nylander must sign by Dec. 1 in order to be eligible to play this season.