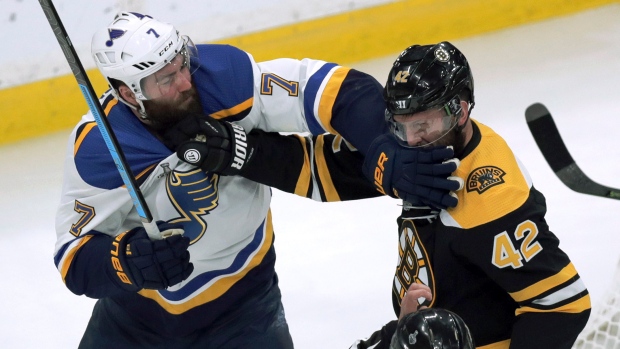 The Calgary Flames appear to be among the several teams looking into pending free agent forward Patrick Maroon, according to TSN's Ryan Rishaug.

Sounds like Flames are among several teams looking into Patrick Maroon.

The 31-year-old posted 10 goals and 28 points in 74 regular season games with the St. Louis Blues this past season. Maroon added three goals and four assists in 26 playoff games to help the Blues win their first ever Stanley Cup.

After starting the 2017-18 season with the Edmonton Oilers, Maroon was traded to the New Jersey Devils in February for J.D. Dudek and a third-round pick. Maroon was originally selected 161st overall in the sixth round of the 2007 NHL Draft by the Anaheim Ducks.

Maroon is coming off a one-year, $1.75 million contract.

Earlier this week Brett Connolly's agent confirmed interest from the Edmonton Oilers, but TSN Hockey Insider Pierre LeBrun reports Connolly's not the only winger the Oilers are looking into ahead of July 1.

LeBrun wrote in The Athletic Wednesday that the Oilers are looking for wingers that fit within their budget.

Connolly, who posted a career-high 22 goals and 46 points in 81 games with the Washington Capitals this season, has received "real interest" from six-to-eight teams this week, his agent said Tuesday. LeBrun reports the 27-year-old is likely to command a salary in excess of $3 million after carrying a $1.5 million cap hit this year.

According to LeBrun, the Oilers are also interested in San Jose Sharks forwards Gustav Nyquist and Joonas Donskoi.

Nyquist, 29, was traded from the Detroit Red Wings to the Sharks ahead of the trade deadline and posted 22 goals and 60 points in 81 games between the two teams. A four-time 20-goal scorer, Nyquist has not ruled out a return to San Jose, but has also drawn interest from the Red Wings in addition to Edmonton, according to LeBrun.

Despite scoring 14 goals for the second straight season this year, Donskoi has received interest from roughly half the teams in the NHL since the speaking period opened on Sunday, LeBrun reports. He notes that teams believe the 27-year-old could blossom in a bigger role and points to the Oilers, Colorado Avalanche and Buffalo Sabres as three of the teams who have reached out.

According to CapFriendly, the Oilers have $8.3 million in cap space with five roster spots to fill this summer.

The restricted free agent talking period opened Wednesday and it appears at least three players received interest from teams who could together an offer sheet on them.

Dreger noted that Marner's agent Darren Ferris continues to speak daily with Maple Leafs general manager Kyle Dubas, while LeBrun adds that Connor's intent is still to negotiate and sign a deal with the Jets.

According to LeBrun, Aho's only desire is to re-sign in Carolina, but that hasn't stopped teams from reaching out. LeBrun wondered earlier this week if the Hurricanes could be a target for a signing bonus-heavy offer sheet, though general manager Don Waddell has stated the team would match any offer sheet.

“We can and we would match any offer made to us and we’ve made that real clear,” said Waddell, who called the subject of offer sheets "overblown by the media" on Tuesday.

The Columbus Blue Jackets recently brought Rick Nash back into the organization as a special assistant to the general manager and Aaron Portzline of The Athletic reports the team is hoping he'll be able to help them in their pursuit of free agents this week.

The Blue Jackets could lose Artemi Panarin, Sergei Bobrovksy and Matt Duchene on July 1 and Portzline reports the team is looking to fill the voids left by the stars in free agency. He points to Anders Lee of the New York Islanders, Dallas Stars forward Mats Zuccarello and Gustav Nyquist of the San Jose Sharks as players of interest for Columbus.

Nash told Portzline he's made four or five pitches to free agents this week over the phone with general manager Jarmo Kekalainen and vice president of hockey operations Barry Zito also on the line.

"I do everything through Jarmo or Billy,” Nash said. “It’s not like I’m calling the shots or figuring out who to get at this point, it’s them telling me who I need to give some information to and I move forward with that.

“I don’t know everybody (who plays) in the league, especially some of the young guys, but through a friend of a friend I usually have a connection. I value my friendships, too; I don’t want to abuse those. The goal is to win the Stanley Cup, but I’ll always be honest and up front. I’m not going to give anybody the go-around.”

Nash added he has not tried to persuade any of the teams pending free agents into staying.

“I feel like their minds are already made up,” he said. “I haven’t had much to do with the players we have here already.”

San Jose Sharks captain Joe Pavelski was a busy man, meeting with the Dallas Stars before flying to Tampa Bay to speak with the Lightning, LeBrun reports.

According to LeBrun, the 34-year-old, who scored more goals (38) than any other UFA on the market this season, has talked with several teams over the phone this week as well.

In fact Pavelski after meeting with the Stars this morning is already in Tampa tonight meeting with the Lightning. There’s potential for a third team visit, I don’t know which team. Plus he’s talked with several teams on the phone this week https://t.co/lvSwbEO3RD

Pavelski added 26 assists for a total of 64 points in 75 games this season with the Sharks, with whom he has spent his entire 13-year NHL career.