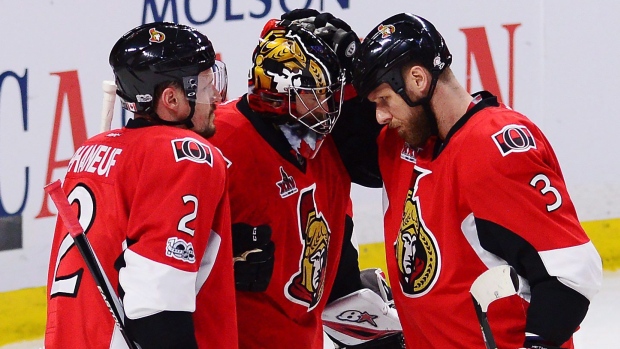 Each day through the Vegas expansion draft and up until free agency on July 1, TSN.ca breaks down the latest news and rumours around the NHL.

What is Plan B?

With Dion Phaneuf deciding not to waive his no-move clause, Ottawa Senators general manager Pierre Dorion must now find another way to avoid losing defenceman Marc Merhot to the Golden Knights for nothing.

Bruce Garrioch of the Ottawa Sun writes the Senators had been expected to opt to choose the seven-three-one protection option, but now may elect for eight skaters and goalie.

That scenario would leave the Senators with only slot protection for Zack Smith, Derick Brassard, Jean-Gabriel Pageau and Ryan Dzingel with Kyle Turris, Mark Stone and Mike Hoffman as locks in the first three slots but would keep the team from giving up Methot.

Garrioch believes the most viable option for the Senators is to make a deal with Golden Knights general manager George McPhee to make sure Methot isn’t picked. However, a league executive told Garrioch that such a deal would cost the Senators “lots more” than a fifth-round draft pick.

The Senators other options would be to trade Methot for a return before the draft or trade either Phaneuf or 23-year-old Cody Ceci.

UPDATE: TSN Hockey Insider Pierre LeBrun reports Phaneuf has submitted a new 12-team no-trade list. He had also submitted one to the Senators prior to the season.

One too many years listed below. Oops. Drop the last $6.5. https://t.co/anHhOoiB7L

If the Senators simply stand pat, they could lose Methot for nothing, or could feel lucky to lose a younger player such as Fredrik Claesson, whose impact may not be felt as immediately.

As Garrioch notes, Methot has served as Erik Karlsson’s defence partner for the past five seasons.

With nothing new to report on the future on veterans Joe Thornton and Patrick Marleau in San Jose, Kevin Kurz of NBC Sports Bay Area broke down possible landing spots for the two on Wednesday.

Kurz believes the Anaheim Ducks and Vegas Golden Knights are both possible landing spots for Marleau, if the veteran wants to stay close to home. He believes Anaheim could be interested if they lose Andrew Cogliano to Vegas and the Golden Knights could earn instant credibility by signing the veteran.

One final potential destination for Marleau, Kurz writes, is the Toronto Maple Leafs. Leafs head coach Mike Babcock has previously stated his appreciation for Marleau at international tournaments and the Leafs could use the veteran to create further competition within their young core.

As for Thornton, Kurz thinks he could be a perfect fit to replace Mike Fisher in Nashville if Fisher decides to hang up his skates this off-season. He also lists the Dallas Stars as a fit, as they were interested in the centre back in 2015, and the Boston Bruins, who Thornton spent his first seven and a half NHL seasons with.

Scott Burnside of Dallasstars.com took his best shot at putting together his version of the Golden Knights by selecting one player from each team.

Below are his picks for each Canadian team, you can see all of Burnside's picks here.

In his mailbag column, Joe Haggerty of CSN New England said he “fully expects” the Boston Bruins to make a trade to acquire a defenceman this summer.

Haggerty listed Jonas Brodin, Sami Vatanen, Tyson Barrie and Matthew Dumba as names on the market that the Bruins could target.

In return, Haggerty believes the Bruins should be willing to part their first-round pick and/or Ryan Spooner and Jimmy Vatrano.

He thinks to Bruins are also trying to move forwards and lists Spooner and Jimmy Hayes as players that could be on the block and mentions Adam McQuaid as a defenceman who could be moved in an effort to shed salary.

Spooner has seemingly been on the block since falling out of the Bruins lineup during their series against the Senators, twice serving as a healthy scratch. The 25-year-old scored 11 goals and added 28 assists in 78 games last season.

Hayes and McQuaid are both projected by TSN Hockey to be exposed in the expansion draft, though Burnside believes the Golden Knights will target goaltender Malcolm Subban.