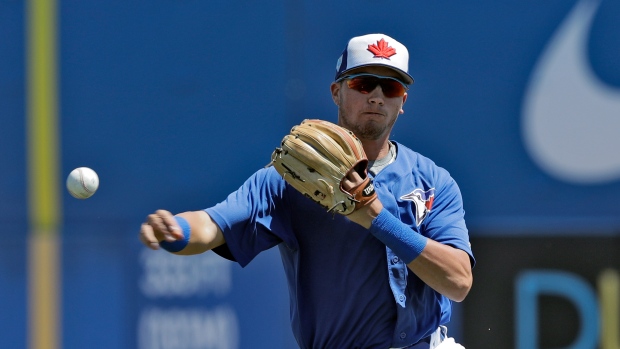 For the most part, baseball executives are loath to publicly compare prospects to established stars.

On the other hand, it’s what fans crave; giving them a little bit of context for a player they’ve usually never seen first-hand, no matter how accurate or inaccurate it may be in the end.

Jordan Groshans has heard the comparisons since the day the Toronto Blue Jays selected the Texas high school infielder 12th overall in the 2018 MLB Draft, a pick made by now-departed director of amateur scouting Steve Sanders, who joined Ben Cherington’s front office in Pittsburgh as assistant GM.

Since entering pro ball, the scouting reports and offensive production alone would be enough to make Groshans one of the system’s most exciting prospects and a part of the next wave in president Mark Shapiro and general manager Ross Atkins’ plan to build a developmental machine and, eventually, a sustainable winner.

But the player the 20-year-old is being compared to most is sure to catch the attention of a fan base that was frustrated to see the original go.

“That’s great, but for me, I just want to be myself,” Groshans said with a smile when those names were brought up recently on a warm afternoon on the backfields of the newly-renovated Blue Jays complex in Dunedin. “I don’t think, ‘Oh, I want to be like Josh Donaldson, or I want to be like David Wright.’ I want to be like Jordan Groshans and just kind of keep myself in the present moment and stay day by day.”

It raises the question: Why are evaluators seeing a J.D. starter kit when they watch Groshans?

It starts with the natural hitting ability and his penchant for quickly making adjustments. Groshans possesses a well-rounded skillset at the plate, one that’s looking like a potential package of average, on-base ability, as well as burgeoning power.

The comparison, however, goes well beyond the similarities in the right side of the batter’s box.

It’s the intensity that really furthers the Donaldson parallels.

“His passion for baseball, his ability to hit, his passion for being a good defender, the athleticism, he’s got a very advanced approach to the entire game,” Atkins said.

Like Groshans, the 46-year-old GM stifles a smile when Donaldson is brought up.

Back to that aforementioned hesitation when it comes to comparisons, Atkins has heard this one, probably sees it, too, but isn’t interested in comparing the best position player prospect in his system to the former American League MVP who helped carry this franchise back to the postseason five years ago.

“I understand the reason for comparisons,” Atkins says carefully. “I’ve also learned over time that they’re dangerous. Not just for perception and expectation reasons, but every individual is different.”

Since almost the day he debuted in the summer of 2018, a few weeks after being drafted, Groshans has turned heads.

Almost immediately he was seen as a below-slot steal at pick No. 12, and if the draft were re-done today Groshans might be a top-five selection.

His .799 OPS across two levels of rookie ball in 2018 was impressive, but it was his scorching-hot start last year that had the prospect community buzzing.

Assigned to Low-A Lansing as 19-year-old, Groshans went out and pummelled Midwest League pitching for five weeks, running up a .337/.427/.482 slash line as a teenager in a league where the average age is more than two years older.

“When they picked me that high, there’s a reason they did and I took that and I ran with it,” Groshans said. “I was fortunate that they picked me there and they obviously saw some potential in me so I took it and ran with it. I expect, every time I go out there, to be great.”

That was before a left foot injury shelved the Magnolia, Texas, product in late April, an issue that would eventually shut him down for the entire season a few weeks later.

Described as a stress reaction on top of the foot, Groshans was prescribed rest and rehab, a frustrating end to what looked like a breakout campaign.

“I was feeling good at the plate, my approach was good, body felt great, just kind of found a groove and then losing it when I got hurt kind of sucked,” Groshans explains. “It was one of those things that kind of came out of nowhere. It just bothered me one game and I didn’t really know much about it. Then they ended up shutting me down and because it was closer to the middle of the year, they didn’t want to rush me back.

The Jays were careful with the foot issue.

Groshans didn’t need surgery, but the club was patient, eventually clearing him fully over the winter.

“Just getting to the point where he had full range of motion and strength, which he does,” Atkins says. “Side to side, all the agility tests, all the power drills are positive.”

Where Do Things Go From Here?

Despite the injury, many outside prospect evaluators had seen enough.

Baseball America is the most confident in Groshans’ ability, pushing him all the way up to No. 29 overall on its top 100 list, three spots ahead of San Francisco Giants catcher Joey Bart, who was selected second overall in the same draft.

That shows just how far Groshans has come in the tiny sample size of 303 minor-league plate appearances across bits and pieces of two seasons.

Groshans, himself, believes there’s another level.

Some would call it that Donaldson-type swagger.

He prefers to use the word confidence.

“I’m ready to make a statement this year and come out and do damage and do what I’m supposed to do,” Groshans said. “I wouldn’t call it a breakout year because for me that’s just regular. That’s what I try to do on an everyday basis. People think that’s cocky, but I take it as I’m confident in my ability. When I step on the field, I want to be the best guy on the field.”

Over the winter, Groshans paid close attention to his body and where it needed to be to get through the grind of a long professional baseball season.

Weighing around 200 pounds right now, Groshans believes 205 is the ideal playing weight for his 6-foot-3 frame, but he wants to bulk up to 210-212 in future off-seasons in order to have a little bit of extra gas in the tank when the season starts and the pound-shedding in the summer heat begins.

As far as his swing mechanics go, if it ain’t broke, don’t fix it.

“I’m keeping everything the same,” Groshans said of his swing. “It’s been working well for me so I’m not changing a thing.”

While there are few questions about his bat at this point, the path Groshans will take defensively is more unknown. After splitting his time between third base and shortstop in 2018, Groshans made all 20 of his starts last year at short.

The Jays’ philosophy is one that promotes versatility, and even an emergency shortstop is better than no shortstop ability at all.

“We err on the side of guys having versatility and learning their range,” Atkins explains. “Not just defensive range, but their overall athletic range, and that is a tool to do that.”

Even though the returns have been better than originally expected at the most important defensive position on the diamond, the expectation is that he’ll be a plus glove at the hot corner when he arrives in the majors.

A future configuration of Vladimir Guerrero Jr. at first base, Cavan Biggio at second, and a left side of Bo Bichette and Groshans is drool-worthy from an offensive standpoint.

“Where ever they put me, I’m going to do my thing,” says Groshans, who’s confident in his ability to play either position.

When he’s doing his thing at the major-league level is a question that will be asked a lot over the next calendar year if he continues performing the way he has.

With the Jays’ window of contention about to creak open, prospects who prove capable of being pushed will be, and Groshans is without a doubt talented enough to fly through the minor leagues and arrive sooner than many expect.

He could begin this season back at Low-A Lansing, but if that happens gaudy numbers will follow, and even being pushed to High-A Dunedin might not challenge Groshans enough.

It would not be surprising, health permitting, to see him finish the year in Double-A New Hampshire, which would have him knocking on the major-league door in 2021 as 21-year-old.

Like every prospect in the pipeline, he’s eager to join the young core that’s starting to show up nightly on the highlight shows around baseball.

“When I was here in the off-season rehabbing, a lot of them were in and out and I got to know them pretty well,” Groshans said. “That environment is something I want to be a part of. Hopefully, soon if everything goes how it’s supposed to. I’m excited for it because, at the end of the day, I want to win a championship.”