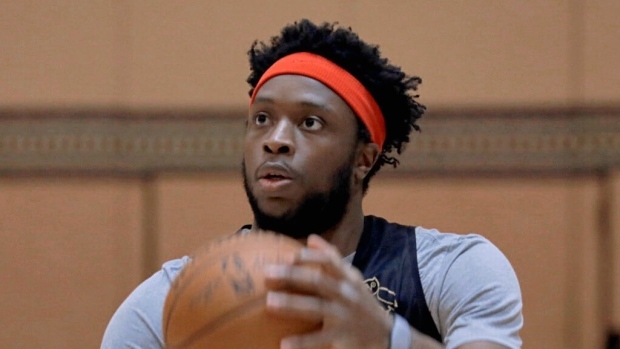 TORONTO – Midway through the opening quarter of their final tune-up game, a mostly uneventful 117-106 loss to Phoenix on Tuesday afternoon, the Raptors ran a play to get the ball in OG Anunoby’s hands against a bigger – and, theoretically, slower – defender.

With Norman Powell inbounding, Serge Ibaka got Anunoby’s attention and pointed to the spot on the floor where he was going to set him a screen. As Anunoby came over and took the pass from Fred VanVleet, Suns centre Deandre Ayton switched onto him.

Anunoby isolated in the corner and blew by the former first-overall pick. Tiptoeing the baseline, the Raptors’ forward whipped a one-handed bounce pass over to Pascal Siakam in the opposite corner. With Phoenix’s defence scrambling to close out, Siakam swung the ball to VanVleet at the elbow and VanVleet hit the cutting Powell, who capped the possession off with an uncontested dunk.

It was a work of art – Toronto’s offence at its finest – and while Anunoby didn’t get credited for the bucket or an assist, it doesn’t develop the way that it did without him.

Until recently, Anunoby’s offensive role was limited to spot-up shooting and the occasional off-ball cut towards the rim. That head coach Nick Nurse and the team have the confidence to put the ball in his hands and ask him to make a play speaks to how far his game has come.

With Tuesday’s loss, the Raptors finished their scrimmage slate with a record of 2-1, but despite an uninspired effort in the finale, there was a lot to like from the three exhibition contests.

Veterans Kyle Lowry – who drew another two charges against the Suns – and Ibaka were in pre-hiatus form and seem ready to restart the season against the Lakers this coming Saturday. Impressive rookie Terence Davis also picked up where he left off. Siakam and Powell recovered from a small shooting slump in the first couple scrimmages to go 12-for-20 on Tuesday, and Marc Gasol looked healthy in extended minutes.

Still, the most encouraging takeaway for Toronto was the continued evolution of Anunoby’s offensive repertoire.

“We just want to make him really dangerous,” Nurse said following Sunday’s 110-104 win over Portland. “He’s a pretty good catch-and-shoot guy but we want to make him a guy that can really make teams pay for having to send help to some of our other [players]. And eventually I [would] just like him to be a bigger part of the offense and just a tough matchup to guard with his shooting, his size, his driving and his posting.”

“I think he's showing some progress here of becoming a much better offensive option for us.”

So much of his improvement on that side of the floor has come off the dribble – a part of his game that he rarely got to explore during his first two seasons in the NBA.

Early in his career, most of his touches came beyond the arc, where he would spot up and be ready to shoot. With plenty of offensive threats on the court – Lowry and DeMar DeRozan in his first year, Kawhi Leonard, Siakam and company last season – Anunoby was the beneficiary of many good looks from three-point range. He hit 37 per cent of them as a rookie.

When he did put the ball on the floor, the results were mixed, and a tad awkward. His handle wasn’t reliable and he would lose his balance easily.

“I have been working on it relentlessly all three years I have been in the league,” the 23-year-old said. “So, I guess it was the build-up of all the hard work that’s showed [recently].”

Putting the ball on the floor and attacking off the dribble is something that’s been a focus for Anunoby. Early in the COVID-19 pandemic, when Anunoby was away from the court, he watched film and tried to identify opportunities where he could have gotten to the rim. Once he was able to get back in the gym, he worked with assistant coach Patrick Mutombo to tighten his handle and improve his balance by staying low and making quick, precise moves.

“It's dramatic,” said Gasol. “You can see it every day that it's something he works at relentlessly. If you work on it, you have to use it in the games. I think OG, we need him to do that. He has to be someone that is aggressive, that plays on the catch. He's not gonna get plays called a lot for him but whenever he catches it, somebody's going to be closing out, he has to make a quick decision, either shoot it or drive it, and he's doing a great job.”

After a rough sophomore season, in which he missed the Raptors’ entire championship run following an emergency appendectomy on the eve of the playoffs, Anunoby is averaging a career-high 10.7 points this year. He was at his best between the all-star break and early March, when the campaign was put on hold. With a string of breakout performances, including a 32-point night in Denver just before the hiatus, you could see his confidence grow.

“The biggest thing with OG I think is just maturing as a man, first and foremost,” VanVleet said. “He came in pretty young, pretty green, not knowing what to expect, or what he wanted to be. He's just kind of finding his groove and finding his spots and I see him putting in a lot more work than I did early on, and [it’s] smart work. He just continues to get better.”

Now, Nurse is looking to expand Anunoby’s role further, using these scrimmages to get him more reps as a focal point of the offence. Not only are they calling plays for him and putting the ball in his hands more often, they’re entrusting him to make the right reads. So far so good in that regard.

He’s just scratching the surface on the defensive end, where his upside is elite. If he can continue making strides offensively, the sky is the limit for the Raptors’ third-year forward.

“I know there is still a long way to go, so I’m not satisfied,” Anunoby said. “I can do more. So I am going to keep working to do more.”