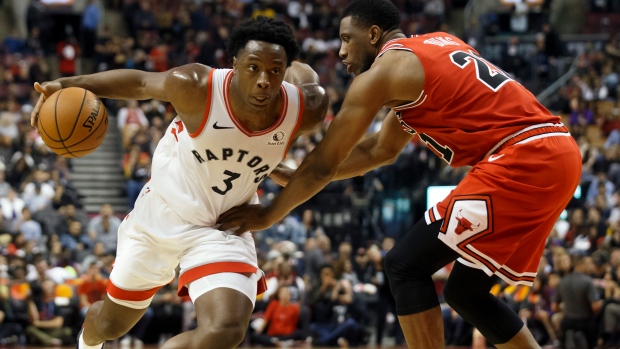 TORONTO – On Tuesday, as the Toronto Raptors raise their championship banner, hand out the rings and begin their 25-year anniversary celebration, they’ll tip off the new season with yet another starting small forward.

In a quarter-century, the franchise has started 20 different players at small forward on opening night. That’s not a typo. TWENTY. It’s a truly bizarre stat.

Call it the curse of Vince Carter, who’s still the only Raptor to make three opening-night starts at the position.

It gets stranger. Over the last 16 years – dating back to the season before Carter was traded – Toronto has started 15 different small forwards on opening night.

Most of them were brought in to be the short or long-term solution at the three, many fell well short of those expectations, and almost all of their tenures were short-lived.

The Raptors return to TSN on October 25th! Stream Raptors vs Celtics, along with 40 more Raptors & +160 U.S. games this season with TSN Direct.

Barring a last-minute change of plans, we’ll soon be able to add OG Anunoby to that list. The question is: will he be the guy to finally buck that trend and break the curse?

Anunoby has experience as a starter. He inherited the small forward gig from Powell just a few weeks into his rookie campaign before ceding it to Leonard last season. If there was any doubt he would win the job back after the reigning Finals MVP left for the Clippers over the summer, it’s been dispelled in training camp.

Coming off a physically and emotionally taxing sophomore campaign, plagued by fluke injuries and personal tragedy, Anunoby has been a preseason standout, earning rave reviews from teammates and coaches, who are all expecting big things from the third-year forward.

“I’m really happy with him right now,” head coach Nick Nurse said following his team’s Thursday morning practice. “He hasn’t scored it all that well but his defence has been great. He’s moving good and he’s in great shape. I like his demeanour and I think he’s got a fresh and positive outlook on the way he’s playing.”

Of course, the Raptors believed Anunoby was on the verge of breaking out a year ago, so much so that they refused to include him in the trade for Leonard and were telling inquiring teams that he was unavailable.

A few days into training camp last fall, his father passed away. Anunoby was excused from the team to be with his grieving family on three occasions, including twice during the regular season.

Then a series of freak injuries hit. He missed time with eye and wrist ailments, suffered a concussion, and needed an emergency appendectomy on the eve of the playoffs, which cost him his entire postseason. All the while he had to get used to his new role coming off the bench.

“It was a learning experience,” Anunoby said of his difficult sophomore season. “I don’t know. It’s hard to explain.”

The months following Toronto’s title run were bittersweet for the 22-year-old – celebrating a championship he wished that he could have contributed more to while preparing to take over for the guy most responsible for making it all happen.

Physically, he didn’t start to feel like himself again until mid-July. Once he got his energy back and regained most of the weight he had lost while recovering from the surgery he was able to get back to work. He spent the rest of the summer training, focusing specifically on his jump shot and ball handling. He was among the select group of roughly 20 players to attend Kobe Bryant’s exclusive California minicamp in August.

Coming into training camp, his goals included winning back his starting job and expanding his role, and while it appears he has accomplished those things, he’s still a man on a mission.

“It means a lot that [the team] believes in me, that they’re behind me and they have confidence in me,” Anunoby told TSN. “It makes me want to go out there and keep earning more trust and get them to have more confidence in me.”

As disappointing as last season was for Anunoby, it wasn’t a total loss. Strange as it sounds, he may end up being better for it. How many young players get an eight-month apprenticeship under one of the league’s premiere talents at his position?

Leonard wasn’t the most vocal leader, to put it mildly, but the example he set could have a long-lasting impact on anybody that was paying close enough attention. Also a man of few words, Anunoby was a couple stalls over from Leonard in the Raptors’ locker room and often worked with the two-time Defensive Player of the Year and NBA champion in practice.

“The main thing [I learned from Leonard] was patience,” Anunoby said. “Like just working hard everyday, being patient with things, knowing stuff doesn’t happen overnight. Then, even on the floor, playing the game patiently, not rushing things, seeing what’s there, taking what’s there, not forcing stuff.”

Off the court, Anunoby observed the way in which Leonard carried himself and went about his business. That lesson may be even more valuable.

“I think both Pascal [Siakam] and OG would say they learned some stuff from Kawhi,” Nurse said. “One of the things Kawhi does really well is he puts in a really professional workday each and every day. And I think those guys saw him come in here early and just go through the treatments and the weights and the shots and the practice and the treatment and the film. It doesn’t bother him in the least that he has a really long workday each day and he just understands it. I think those guys picked up from that a little bit.”

Like the small forwards that came before him, Leonard’s time in Toronto was brief. Unlike many of those other small forwards, his contributions won’t soon be forgotten. However, he’s moved on and the Raptors have no choice but to do the same.

They’re a team in transition now. There are still veterans around in Kyle Lowry, Marc Gasol and Serge Ibaka, and the goal is still to win, but they’ll aim to do so with more of an eye on the future. They want to see if Siakam can take another big step forward in a featured role this season, but they also need to see what they have in Anunoby, who will be eligible for a contract extension next summer.

Have they finally found their small forward of the future or will Anunoby be just another name on the list? Answering that question will be one of their top priorities this season.​