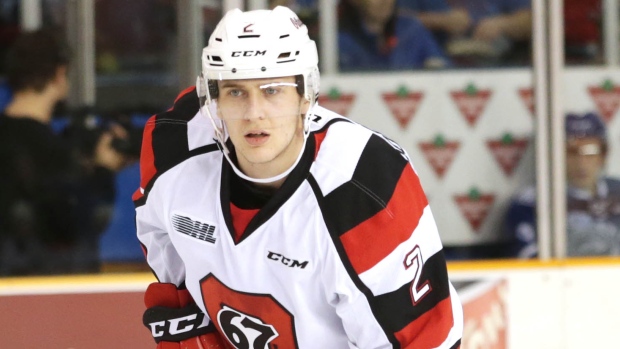 Noel Hoefenmayer doesn't recall exactly when he received the cutout of a moustache, but he will always remember the inscription on the back.

"To Noel, Dream big dreams," wrote former National Hockey League star Lanny McDonald.
​
"It's something I've had in my room for a long time," Hoefenmayer said. "My mom actually got it, I'm not sure how, but it was put in my room one day and it's been there ​ever since I can remember. I've used that, mentally, in the back of my head for a number of years and it’s helped me push forward toward my goals. It’s right beside my bed so when I wake up it's hard to miss." 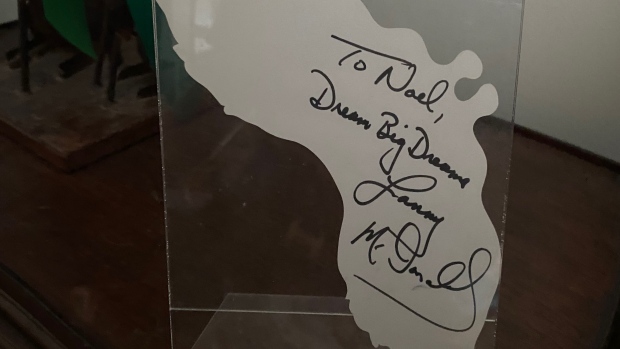 Hoefenmayer​ didn't know much about McDonald or his famous moustache as a kid, but he did some research in the ensuing years and the message resonated more and more.

Hoefenmayer's big dream is to play in the NHL one day. But last summer the Ottawa 67s defenceman suffered a setback when the Arizona Coyotes, who picked him in the fourth round of the 2017 draft, decided not to sign him to a contract relinquishing his rights. It may have been a blessing in disguise.

"It drove me and pushed me to new limits so I'm grateful for that," he said.

Hoefenmayer, who stands 6-foot-1, 196 pounds, stayed in Ottawa last summer working closely with the 67s strength and conditioning coach and the skills team. Then, in his over-age season, Hoefenmayer proceeded to win the Max Kaminsky Trophy as the OHL's top defenceman. He led all major junior defencemen with 82 points in 58 games

"I'm really happy that my off-season work paid off," the Toronto native said. "I took not signing with Arizona pretty seriously when I was working last summer. I knew what my goals were, I knew what I was working for so to have that pay off was rewarding."

Hoefenmayer increased his point total by 20 despite playing 10 fewer games than in the 2018-19 season. And he didn't just earn a trophy from the league, he also earned a contract. The 21-year-old signed a two year American Hockey League deal with the Toronto Marlies. All of a sudden that big dream of playing in the NHL seems closer than ever.

"It's one step closer," Hoefenmayer said cautiously. "The road never ends until you're there. It's a good step forward, but there's a lot more hard work to do."

Hoefenmayer​ spoke to TSN via Skype this week and explained why he trusts the Leafs organization to help him take the next strides in his development. The following is an edited transcript of the interview.

Where did you improve the most last summer?

"I really wanted to focus on my speed. I also worked a lot on my offensive-zone play, working the blueline, moving the puck quickly, getting my feet moving out of tight situations so I think that translated pretty well. In hockey there's always room for improvement, especially with skating. My skating improved last summer, but that's something I'll look for again in this quarantine period and this summer leading into next season."

Really proud of that young man!When through disappointment last year and bounce back with everything he got. What a great prouve of character and resilience. Even if it didn’t surprise any body in the 67’s family, you earn every once of Success you got! #greatmodel #determination https://t.co/u8Y3FOxIVy

What's the message from Toronto's player development staff so far?

"I've had some good discussions with them. They've been running some mobility classes and mindfulness training so I've been doing that every day throughout the week and hoping, as soon as I'm allowed, to get in there and work with them."

Why was the Leafs organization the right choice for you to continue your development?

"I'm a Toronto kid so I grew up watching the Leafs and it's a true honour to play for my hometown and hopefully earn an NHL contract at some point. That was a huge thing, but also their development [staff] and what they do to players. I've seen it throughout the years and it's well-known throughout the whole of hockey that they have a great development system."

What stands out the most about Toronto's development team?

"I think the big thing is Barb [Underhill]. She's a great skating coach and she's worked with a lot of players in the NHL especially with the Leafs and turned them into great skaters and that's the No. 1 area I need to work on. She's very good so I'm excited to work with her."

You scored 26 goals in 58 games this season, including quite a few bombs from the point. How did you turn your shot into the weapon it is now?

"A lot of years of practice. That's one thing I've really enjoyed doing since I was young. I'd always shoot in the driveway with my younger brother and my dad would be out there with us. Since I can remember I've been shooting pucks in my driveway. Even now I've been trying to keep up with that and shooting pucks and staying active so I can keep my shot ready. That's something I've always enjoyed doing and it made myself and my brother closer and it was something my dad and I loved to do as well. So, we'd always go out to the driveway after a long day and shoot pucks and be in the moment."

I still cant believe this guy is unsigned right now.

Noel Hoefenmayer with a bullet.

Do you guys think he will get a contract somewhere this summer? #OHL #HockeyTwitter pic.twitter.com/Z9v74vGSPv

Where did you improve this year when it comes to off-the-ice habits?

"This year, being as determined as I was to earn a contract and move on to the next level, I learned a lot about myself. Last year our team had Mikey DiPietro, Sasha Chmelevski, Kody Clark, guys like that, and they were the same age as me, but I took a lot of information from them and how they acted away from the rink and how professional they were. I tried to implement that into my game this year with my lifestyle and not necessarily changing, but tweaking little things to give me more of a competitive advantage and I think it really paid off."

Can you give us an example of what you tweaked? Was it your diet?

"Dieting, sleeping patterns, getting to bed early. We had early-morning practices [8 a.m.] so we had to be at the rink early. Sleep is essential to have a good day especially as high-performing athletes so getting in bed early and getting a solid sleep definitely benefited me a lot."

Who do you model your game after?

"It's hard to compare your game to players in the NHL, because everyone is kind of different and has their own game. There’s a lot of guys I like to watch and John Carlson is one of them. I like the way he plays and I like watching little things he does."

The AHL isn't sure yet when it can resume so you may not play again for a while. How concerned are you about this long layoff?

"I'm not very concerned. I think this is a good opportunity for me to work on little skills that maybe I wouldn't necessarily have the time to work on. It could be an advantage for me and it's something that I'll take day-by-day and really work on myself."

From @frank_seravalli: Every #NHL team is wondering what happens if the #AHL is not ready to begin the 2020-21 season - https://t.co/mWYLU2hqZD #TSNHockey pic.twitter.com/iKBiSjcYmT