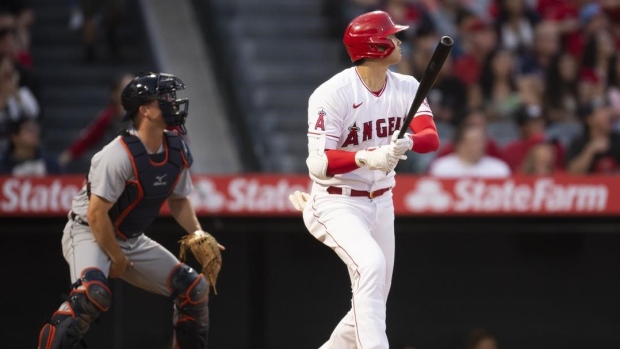 ANAHEIM, Calif. (AP) — Shohei Ohtani homered for the fourth time in five games and matched his high for homers in a season as the Los Angeles Angels beat the Detroit Tigers 8-3 Saturday night.

Ohtani, who announced Friday that he would participate in next month’s All-Star Home Run Derby, has 22 homers and is tied for second-most in the majors with San Diego’s Fernando Tatis Jr. They are one behind Toronto’s Vladimir Guerrero Jr.

Ohtani’s two-run shot to left field off Wily Peralta (0-1) matched his total from 2018, when he won AL Rookie of the Year honors. That season, Ohtani hit 22 homers in 104 games and 367 plate appearances. This season, he reached the mark in his 66th game and 264th at-bat.

It is the first time in four major league seasons that Ohtani has homered five times in four games. However, he did have four in three straight games in September 2018.

Ohtani’s homer was part of a four-run third inning by the Angels, who have won six straight home games. Jared Walsh also went deep in the inning , hitting a two-run drive to right field that put Los Angeles up 5-0.

Patrick Sandoval (2-2) struck out nine in 5 2/3 innings. The left-hander, who didn’t get his first major league victory as a starter until his 20th start last Sunday at Arizona, has won two straight.

Daz Cameron had two hits, including a fourth-inning home run, and drove in two runs for Detroit, which has dropped three straight. Jonathan Schoop also had a solo shot in the fifth.

Peralta was making his first start since he was with the Milwaukee Brewers in 2017. The right-hander allowed five runs on seven hits in five innings and struck out two.

David Fletcher had three hits and drove in a pair of runs for the Angels. One of his RBIs came on a safety squeeze during the sixth inning, extending the Angels’ lead to 6-3.

Fletcher also had one of the best baserunning plays of the season during the third inning. He tagged up from first when Justin Upton popped up in foul ground to catcher Jake Rogers, and advanced to third when Peralta’s throw to second was high.

Upton’s stolen base during the eighth inning was the 150th of his career. He is the 39th player in big league history with 300-plus homers and at least 150 stolen bases.

Walsh has homered in two straight games and has 17 on the season. The first baseman has also gone deep 26 times since Sept. 4 of last season, second in the AL during that span.

Walsh scored the Angels’ first run in the second inning when he doubled to left-center with one out, advanced to third on Jose Iglesias’ single, and scored on grounder by Luis Rengifo.

Tigers: INF Niko Goodrum was placed on the 10-day injured list due to a tendon strain to his left finger. Goodrum was injured while he made a diving attempt on a ball during the sixth inning of Friday's game. INF Isaac Paredes was called up from Triple-A Toledo. He was originally slated to start at shortstop, but that changed when his plane was delayed and he couldn't get to the ballpark on time.

Angels: 3B Anthony Rendon returned to the lineup after missing the past four games due to a tricep issue. ... RHP Jaime Barria was called up from Triple-A Salt Lake while INF Kean Wong was sent down.