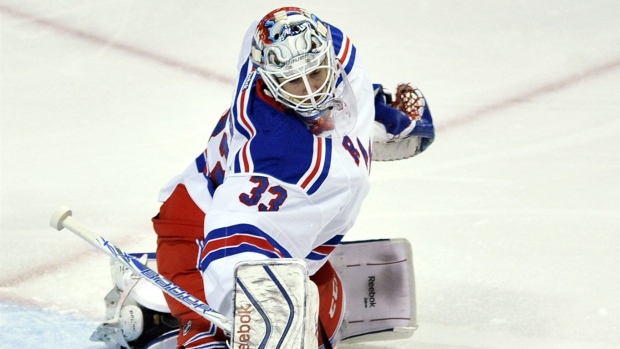 SUNRISE, Fla. - Edmonton Oilers general manager Peter Chiarelli came to the draft knowing he'd end up with Connor McDavid. Beyond that, he wanted to improve his defence and goaltending.

After getting defenceman Griffin Reinhart from the New York Islanders on Friday night, the Oilers got their goaltender by sending three picks to the New York Rangers for Cam Talbot.

Talbot has just 57 games of NHL experience but at 27 could still blossom into a starter. After a stellar start to his NHL career, Talbot starred this past season in place of the injured Henrik Lundqvist.

"He's a great goalie, stepped in great when Lundqvist was out and did a great job," McDavid said. "That was something Edmonton wanted to do was go out and get a goalie, and they did that."

Talbot has a year left on his contract and can be an unrestricted free agent next summer.

The Oilers weren't done dealing, getting defenceman Eric Gryba from the Ottawa Senators for prospect Travis Ewanyk and the 107th pick.

Edmonton got that 107th pick from the Toronto Maple Leafs along with minor-league forward Brad Ross in exchange for defenceman Martin Marincin.