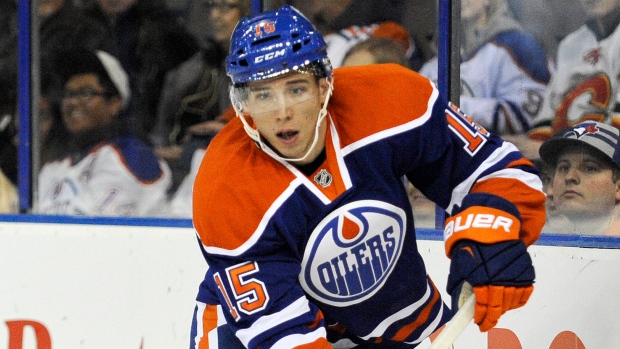 EDMONTON — The Edmonton Oilers made the most of their pre-season debut in their brand new arena.

Tyler Pitlick had a goal and an assist as the Oilers won their first exhibition game at the Rogers Place Arena, beating the Calgary Flames 4-2 in a split-squad game on Monday night.

Iiro Pakarinen, Ryan Vesce and Kris Versteeg also scored for the Oilers, who were impressed to see their new home packed for the pre-season.

"Having a pretty much sold-out barn for an exhibition game was amazing," said Versteeg, who's on a professional try out invite after recording 313 points in 550 games with the Chicago Blackhawks and five other NHL teams. "This building, it's almost like a space dome or something. It is futuristic. It is 10 years ahead of its time.

"There is a lot that the players are still in awe of. Having the fans there tonight, it made it even better."

Oilers defenceman Adam Larsson, who made his debut following a much-debated trade from New Jersey in exchange for Taylor Hall, said he can't wait for the games to count in the new arena.

"Playing in the building was a great experience and it is going to get even better when the season starts," he said. "It's going to be a fun year. You can tell the atmosphere in this building is going to be great."

Kenney Morrison and Freddie Hamilton replied with the goals for the Flames.

"It's a pretty impressive building," Flames assistant coach Dave Cameron said. "Just the space that's in here. The player's accommodation… the coaches room here is as big as a lot of dressing rooms. It is a beautiful, beautiful building."

Edmonton got the first goal as Pakarinen banked home a rebound during a scramble in front of Flames starting goalie Jon Gilles.

Calgary countered with seven minutes remaining in the opening frame when Mark Jankowski sprung Morrison for a partial breakaway and beat Oilers goaltender Cam Talbot high to the glove side.

The Flames went up 2-1 not long afterwards as a Hamilton shot banked off Edmonton defender Oscar Klefbom and dribbled past Talbot.

Eetu Laurikainen came in to replace Talbot in the Edmonton net for the third period.

The Oilers tied the game three-and-a-half minutes into the third on the power play as late training camp invite Vesce tipped a Matthew Benning shot past Gilles.

Edmonton grabbed the lead six minutes into the third as Pitlick swooped in to deposit the rebound of Taylor Beck's backhander on the doorstep.

Midway through the third, Oilers college free-agent signing Drake Caggiula was awarded a penalty shot, but shot the puck over the net.

The Oilers made it 4-2 as Pitlick made a nice feed to set up Versteeg.

Notes: The Flames and Oilers also played a split-squad game at the same time in Calgary. The Oilers also won that game, 2-1… Edmonton's official opener for regular season play is on October 12th against the Flames. … Oilers centres Connor McDavid and Ryan Nugent-Hopkins will join the team for camp on Tuesday. They took a few days off after suiting up for Team North America at the World Cup of Hockey.