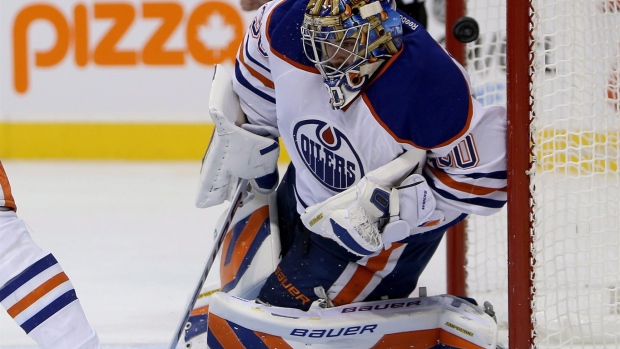 Mired by injuries out of the gate, the Edmonton Oilers recalled forward Steve Pinizzotto and goaltender Richard Bachman from the Oklahoma City Barons on Wednesday.

He had a 3.75 goals-against average and .828 save percentage in two preseason games during training camp and has appeared in one game for Oklahoma City this season. Pinizzotto has one assist in one game with the Barons.

The team also announced that goaltender Viktor Fasth suffered a groin injury Tuesday night in Los Angeles and has been placed on injured reserve, while centre Bogdan Yakimov has been assigned to Oklahoma City.

The Oilers played without two of their top forwards in Tuesday's 6-1 loss to the Kings, with Ryan Nugent-Hopkins and Jordan Eberle sidelined with undisclosed injuries. Nugent-Hopkins is out again for Wednesday's game in Phoenix, while Eberle is a game-time decision.