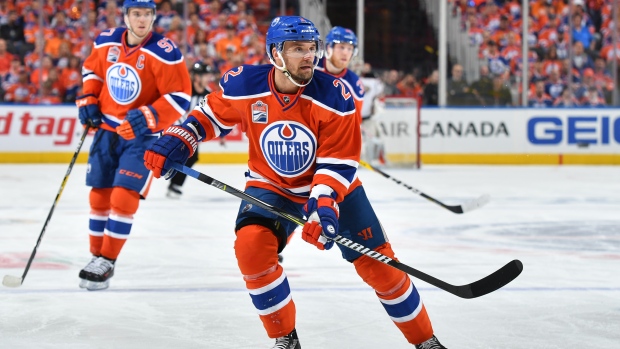 Edmonton Oilers defenceman Andrej Sekera has shed his non-contact jersey in practice and appears to be getting closer to making his season debut after tearing his Achilles tendon last summer.

Sekera underwent surgery on the injury, which was incurred off-season training, in August and was not given a timeline for recovery.

According to the Edmonton Sun, Sekera could return to NHL game action in January, though the 32-year-old believes he would benefit from a conditioning stint in the American Hockey League first.

“Definitely going there would be good for my tempo so I can see where I’m at and I can compare (the AHL to the NHL) and see what I have to do,” Sekera said Thursday. “I wish I could play now but I have some testing and doctors appointments first. I am going on one tomorrow and see what they say about my strength.”

Sekera appeared in 36 games last season, posting eight assists. His season began in late December after he missed nearly three months following an ACL tear that he sustained during the 2017 Stanley Cup playoffs. He did not go through a conditioning stint before returning last year.

“It feels good,” Sekera said of his ankle. “The strength isn’t there but it’s progressing. I’m getting some practices in with some physicality and some unexpected moves.

“The knee was different with the pivoting and opening up the knee with the brace on,” he said of his recovery. “One knee was perfect and the other one, it didn’t feel good.”

The Oilers are currently without Sekera, Oscar Klefbom and Kris Russell on the blueline due to injuries. The team said Thursday that Russell could return after the holiday break, while Klefbom is expected to be sidelined into the new year.

Taken in the third round of the 2004 NHL Draft by the Buffalo Sabres, Sekera has appeared in 683 games with the Sabres, Carolina Hurricanes, Los Angeles Kings and Oilers.