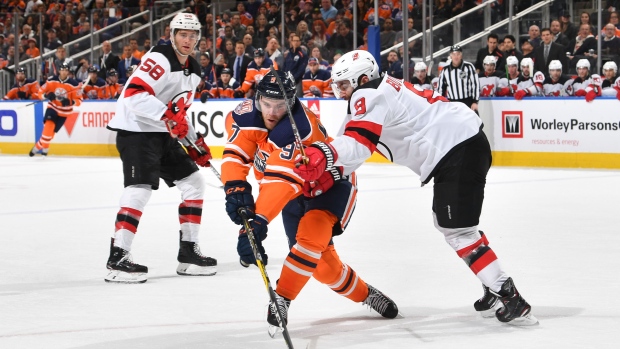 EDMONTON — The New Jersey Devils snapped out of their slump just in time to damage the playoff hopes of the Edmonton Oilers.

Kenny Agostino, Damon Severson and Kevin Rooney each had a goal and an assist as the Devils ended a season-high losing streak with a 6-3 victory over the Oilers on Wednesday. Edmonton is now six points back of the Western Conference's second wild card spot, currently held by the Arizona Coyotes.

"We knew that last night's third period was unacceptable and when you have good leadership and good character, that's a big part of that response," said Devils head coach John Hynes, whose team allowed six third-period goals in a 9-4 loss to the Calgary Flames on Tuesday. "We had a pretty stern meeting this morning and the guys were pretty receptive to what we needed to do better and tonight was better execution of what we needed to do to have success."

"I think it's been well documented how we've struggled on the road this and in back-to-backs, so to get a win and both back to back, it was good for us," said New Jersey goalie Cory Schneider. "We felt pretty bad about the game last night. Every one of us knew that third period was unacceptable."

Sam Gagner, Alex Chiasson and Matt Benning replied for the Oilers (31-32-7), who have lost two of their last three games. The Minnesota Wild (74 points), Colorado Avalanche (72), and Chicago Blackhawks (71) sit between Edmonton (69) and Arizona (75).

"We took them lightly, took the game for granted. I don't think we came to work," said Oilers captain Connor McDavid, who hit the 100-point mark with two assists in the game. "Obviously it is disappointing that we missed a huge opportunity tonight. It's frustrating."

The Devils started the scoring 7:34 into the first period when Agostino's rebound bounced up in the air before landing behind Oilers goalie Mikko Koskinen and trickling into the net.

The Oilers made it 2-1 on the power play with 5:38 left in the first when Chiasson redirected a McDavid feed into the net on the doorstep for his career-high 20th goal of the season. McDavid extended his point streak to 10 games with the assist.

Zajac showed some deft hands in front to score on the backhand to tie the game back up for New Jersey with 18 seconds left in the opening period.

The Devils regained the lead six minutes into the second on a power-play goal from Severson and then went up by a pair with seven minutes left in the period on a screened shot by Quenneville. That goal chased Koskinen from the net after stopping 14-of-18 shots. He was replaced by backup Anthony Stolarz, who turned aside 15-of-17 shots.

Stolarz didn't fare much better, allowing a goal on a wrist shot by Rooney with 3:28 left in the second.

Edmonton got a goal back with 41 seconds left in the second as McDavid set up a Benning goal.

The Devils got some insurance with eight minutes left in the third on a short-handed goal by Coleman.

"We didn't respect the opponent enough. I don't think, and it led to some careless defensive play and we got burned because of it," said Oilers head coach Ken Hitchcock.

Both teams return to action on Friday with the Devils playing the fifth of a six-game trip in Vancouver and the Oilers embarking on a three-game trip, starting out in Arizona.

Notes: The only previous meeting between the two teams this season was to start the year as part of the NHL Global Series in Gothenburg, Sweden, with the Devils winning 5-2.