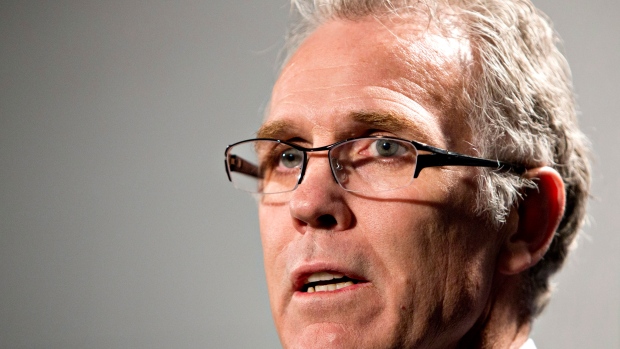 "The accountability of the players to execute has to improve," said MacTavish.

"Visually to me we're a better hockey team.

"(But) there isn't any tangible evidence of any of that improvement, and that's what's so difficult for everybody to swallow."

MacTavish has been feeling the heat from fans and media with the team at the bottom of the NHL standings (6-15-5) in the throes of an 11-game losing streak.

The Oilers have not been in the playoffs since 2006. Since then, fans have endured multiple coaching changes and failed rebuilding plans.

MacTavish said the team has not progressed as fast as he expected, but said he won't deviate from his long-term plan to draft and develop talent.

"As painful as this process is, we feel that it's a necessary step to get us to the next level," he said.

Asked if the plan is not just behind schedule, but the wrong plan or the right plan executed by the wrong people, MacTavish retored: "Is it time to punt out the core of these players at 23 and 24 years old as they're developing?"

"I've switched out 14 or 15 players in the 18 months that I've been on the job, and what I think I have now is a group that is capable of growth."

MacTavish said everyone is "under scrutiny" from the front office to the dressing room, but defended his first hire, second-year coach Dallas Eakins. He suggested Eakins isn't going anywhere.

"Those coaches were all delivering the same message and we need a higher level of execution (by the players)."

Eakins has been criticized for giving some players too much rope, doing too much X's and O's analysis and not enough yelling.

The coach skated the players hard in Friday's practice but insisted it wasn't a punishment for poor performance, rather it was a pre-scheduled "conditioning day."

"The worst day is when my boss and the players' boss has to come in here and get pelted with bullets and questions about the team," Eakins said of MacTavish's news conference. "That responsibility falls on me, my staff and the players in that room. It's something I take personally and certainly all of the players should be taking it personally."

Eakins said his main concern was not whether he might lose his job but bridging the divide between the fans and the team.

"We're doing everything we can to repair that," he said.

MacTavish has been around the Oilers for much of the last, lost decade, as a coach or in another front office capacity, but lashed out when a reporter tried to tie him to it its failings.

"Don't lop me in to a situation of (previous) power and influence in the management level of this organization," said MacTavish. "I've been on the job for 18 months."

MacTavish has been criticized for leaving Eakins with little to work with at centre after Ryan Nugent-Hopkins while saddling him with subpar goalies in Ben Scrivens and Viktor Fasth.

MacTavish said it's not easy to trade when you have so few tradeable assets.

"There are four or five (Oilers) players that would bring us significant value, (but if you trade one) we solve one (problem) and we create another."

Captain Andrew Ference agreed with MacTavish that the players need to step up.

"As players, we all know that everybody has a role in what's be going on," he said. "All of us have different facets we have to work on and improve on which will collectively make us more successful."

But fan anger this year has shifted squarely to the front office given the Oilers have drafted few meaningful players outside the first round in recent years while some Oilers players traded away flourish under other coaches and systems.

Fans have also focused their vitriol on owner Daryl Katz, who came of age cheering for MacTavish, Oilers hockey operations president Kevin Lowe, and other players during the team's glory years in the 1980s.

Katz is too close to his old buddies and won't pull the trigger to fix the front office, say critics.

MacTavish said no one is more upset about the Oilers' plight than the man in charge.

"I would characterize the owner as upset. He's like a lot of our fans times 10," he said.

The Oilers next play the San Jose Sharks at home on Sunday.

The Oilers are closing in on dubious history. Here is a look at record NHL and Oilers streaks: