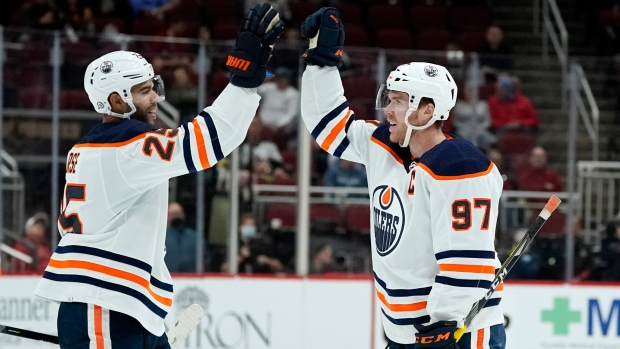 The Edmonton Oilers are off to a perfect 5-0-0 start and, not surprisingly, are the highest-ranked Canadian team in the first installment of our Power Rankings.

The Oilers come in at No. 2 on our list (behind only the Carolina Hurricanes) and are filling the net with ease to start the season. No team has scored more than Edmonton’s 23 goals and its power play is clicking at a ridiculous 47.1 per cent.

As for Connor McDavid, he’s outpacing the lofty standards he set for himself last season, scoring 13 points in his first five games of the season. It’s early, but just about everything has gone right for an Oilers team that looks as dangerous as any in the NHL.

That does it for Canadian teams ranked in our top 10. Edmonton is the only team north of the border with a win percentage above .500 to start the season.

The Calgary Flames sit 14th in our Power Rankings following a 2-1-1 start to the season. The Flames goal differential sits at an even 0 – 11 goals for and 11 goals against. However, the process has been good, with Calgary ranking eighth in expected goal differential.

The Flames have played great defensively in their first four games, ranking first in expected goals against (reflection of shot quality and quantity). Head coach Darryl Sutter has helped fix what was an Achilles heel with this team, allowing scoring chances off the rush. No team has allowed fewer per game to start the season. Offensively, Elias Lindholm is off to a torrid start with six goals in four games.

Back-to-back wins have helped the Vancouver Canucks to a 3-2-1 record and 15th place in our rankings. Connor Garland has made quite an impression with his new team, leading the Canucks in scoring with eight points, seven coming at even strength. Thatcher Demko continues to show he is one of the top young goalies in the league, posting a .924 save percentage through in five starts.

The Toronto Maple Leafs check in at 18th spot following a disastrous 7-1 loss in Pittsburgh, Saturday night. The 2-3-1 Maple Leafs are averaging just two goals per game despite ranking first in expected goals.

Toronto leads the league in scoring chances, slot shots, cycle chances and rebound chances, yet rank 27th in goals scored. As a result, the Leafs rank first in expected goal differential but 26th in actual goal differential. There isn’t a team in the league with such great disparity between process and results.

All signs point to the good outweighing the bad so far with the Maple Leafs. We expect them to have a strong week and sit higher in our next Power Rankings.

The Winnipeg Jets, on the other hand, are pretty much the opposite of the Leafs. They have weak underlying numbers but strong results.

The Jets are 2-2-1 with a positive goal differential despite having the worst expected goal differential in the league. Winnipeg has allowed more scoring chances and more shots on net from the slot than any team, a big reason why Connor Hellebuyck is currently sporting a save percentage under .900.

The Jets have been able to outscore their problems so far, averaging four goals per game, but if they don’t tighten up defensively, we expect them to drop on our list.

The 2-3-0 Ottawa Senators rank 27th in our first installment of the Power Rankings. Scoring has been a challenge for the Sens, averaging just two goals per game. However, Ottawa is getting great goaltending from Anton Forsberg, Matt Murray, and Filip Gustavsson. All three have save percentages well over .900 as the Sens sit third in goals saved above expected – only Carolina and Florida are better and neither of those teams has lost a game.

Goaltending this good is not sustainable, so the Senators will need to tighten up defensively. Ottawa has done a great job of slowing teams down, ranking second in the league in rush chances against. However, defending in-zone has been an issue as the Sens are allowing more cycle chances against than any team.

The dam finally burst for the Montreal Canadiens on Saturday night. After scoring four goals in their first five games, the Habs exploded for six goals in a win against the Detroit Red Wings.

Overall, 1-5-0 Canadiens have struggled mightily in just about every facet of the game which is why they rank 30th in our Power Rankings. The Habs are 29th on the penalty kill, 31st on the power play, 31st in goals for, and 22nd in goals against.

This is a very different team from the one that shocked the hockey world by making the Stanley Cup Final last season. Their starting goalie, a pair of top-four defencemen, and two of their top-three centres are either injured or no longer with the organization. It would be unrealistic to expect this team to find chemistry right out of the gate, but Montreal needs to carry its momentum from Saturday into this week and string some wins together before they dig a hole too deep to climb out of.