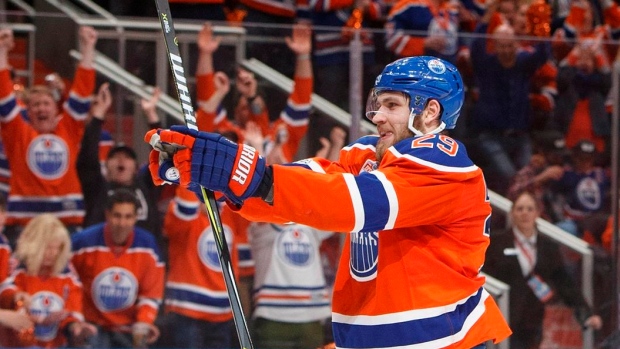 EDMONTON — The two biggest cornerstones of the emerging Edmonton Oilers franchise are now locked up for the long haul.

Six weeks after extending Connor McDavid for eight years and US$100 million, the Oilers signed 21-year-old Leon Draisaitl to an eight-year contract of his own with a sizable annual cap hit of $8.5 million. Paired primarily with McDavid, Draisaitl posted a career-best 77 points last season — eighth-best in the NHL.

He added another 16 points during the first Edmonton's playoff run in more than a decade — separated, eventually, from the precocious Oilers captain.

"I'm really excited to be back for eight years," Draisaitl told the Oilers website after the signing was announced. "I never really thought about going anywhere else. We have something really special. We have a great group of guys. It's something I wanted to be a part of as long as possible."

In securing his long-term rights, the Oilers are betting on Draisaitl, a restricted free agent and one of only seven German NHLers last season, to thrive with or without McDavid, the reigning winner of the Art Ross and Hart trophies and Ted Lindsay Award. The third-overall pick of the 2014 draft, Draisaitl stands to own the 10th highest cap hit in hockey next year — equal to Lightning captain and two-time Rocket Richard trophy winner Steven Stamkos.

Both were signing their third NHL deals, however, and are slightly older than Draisaitl, who won't turn 22 until October 27.

Draisaitl, a natural centre, slid to right wing alongside McDavid at the start of December and went on to notch 60 points in 58 games — good for sixth in the NHL over that span.

In question now and moving forward is whether the Oilers keep the two franchise studs together and have them wreak havoc as a duo, or split them apart for increased depth.

McLellan went in the latter direction midway through a second-round playoff series against the Anaheim Ducks, and it worked effectively. Draisaitl, centring a second unit, scored once in a Game 5 overtime loss and then exploded for a hat trick and five points in a 7-1 Game 6 thrashing.

He ultimately finished as the Oilers leading playoff scorer, besting McDavid (nine points), who was mostly thwarted in a matchup with feisty American pivot Ryan Kesler.

"It's interesting, there will be a lot of talk about separating those two now," McLellan said after Draisaitl's loud Game 6 before the Oilers fell to the Ducks in Game 7. "But production-wise Connor and Leon were the two best players together from the time we put them together 'til the end of the year. It's hard to argue with that."

Underlying numbers suggest Draisaitl got a not-so-surprising bump from McDavid.

Draisaitl posted a sizzling 54 per cent puck possession mark in 674 five-on-five minutes alongside the 20-year-old and a cooler 48 per cent clip in 500 minutes without him; McDavid's numbers, by contrast, dropped off only slightly without Draisaitl.

Still, Draisaitl piled up 19 goals and 51 points in 72 games as a 20-year-old during his sophomore season and next to none of that came with a then-rookie McDavid. He also captured the Stafford Smythe Trophy as MVP of the Memorial Cup in 2015. The more recent playoff showing, which saw him matched against Ducks captain and all-star Ryan Getzlaf, offered a potential preview of his NHL readiness for the second-line centre role moving forward.

The Oilers, in that case, stand to benefit from two high-end centres and subsequent matchup headaches for the opposition. Most, if not all, would opt to employ their best defensive weapons against McDavid, leaving Draisaitl free to roast weaker options.

Vying for their first Stanley Cup since 1990, Edmonton is expecting a star regardless.

"Any time you can lock up one of your top players for a lengthy period of time, it's a good day," said Oilers general manager Peter Chiarelli on the team Twitter account.