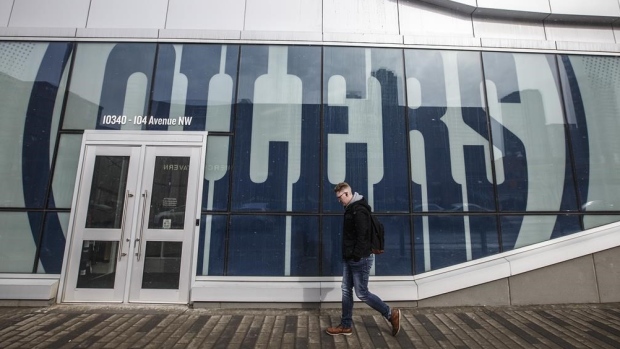 The Edmonton Oilers were back at Rogers Place on Monday — some of them, anyway.

The club opened its arena for voluntary, small-group training as the NHL moved to Phase 2 of its return-to-play protocol with an eye towards eventually resuming its pandemic-hit season.

Players across the league have the option to work out at their home facilities — depending on availability — beginning this week under strict health and safety guidelines, though they may also continue to train where they're currently located.

"It's definitely a different circumstance," Benning said on a video conference call with reporters after the informal skate. "There's people there to help us through and make sure we're doing the right things to stay safe and wear masks and (have) proper hygiene.

"It was exciting to get back to the rink, but it was a different feeling. A lot of things we had to do in order to be safe and enjoy the facility."

A number of NHLers returned to their summer residences during the early stages of COVID-19 pandemic and are still scattered across North America and Europe. Depending on the jurisdiction, some have been on the ice for weeks.

The league — which recently unveiled its 24-team, return-to-play plan to resume the 2019-20 season this summer — was forced to pause its schedule March 12.

The Calgary Flames were also allowed to open their facility Monday, but a spokesman said in a email that will happen sometime later this week. Alberta's chief medical health officer, Dr. Deena Hinshaw, said she gave the Oilers and Flames permission to resume training with public-health measures in place as of Monday morning.

The Vancouver Canucks and Winnipeg Jets aren't expected to open their rinks any time soon because most of their players aren't in those cities at the moment. The Canadiens said last week that with only two players in the Montreal area, their practice facility will remain closed for maintenance, but could reopen with 72 hours notice.

Meanwhile, the Maple Leafs said Friday some of their players in Toronto were being tested for COVID-19 with an eye towards having them go through physicals this week. The Ottawa Senators were among the seven NHL teams to have their seasons officially come to an end with the announcement of the 24-club format.

While some NHL players been able to skate during the pandemic, most have had to make do with either home gyms or get creative to stay in shape.

"It's one thing to train and it's another thing to get on the ice," said Benning, who added Chiasson took the lead on organizing drills. "Some people can get out there and pick up where they left off, but if I'm off the ice for two days it feels like I've never skated in my life.

"Three months was a little nerve-wracking, but I felt a lot better than what I expected."

The next step in the NHL's four-phase plan to reopen would see teams hold training camps sometime after July 10 before hopefully resuming play later that month or in early August.

The league has said it will select two hub cities to host 12 teams each if it gets the go-ahead for health and government officials. Edmonton, Vancouver and Toronto are among 10 markets vying to serve as hubs, but unless the Canadian government alters its mandatory 14-day quarantine for all international travellers, both will be located in the United States.

While moving to Phase 2 and hammering out the details on the 24-team format are big steps, plenty of other hurdles remain for the NHL and the NHL Players' Association before the games will be allowed to resume.

The NHL, which worked closely with the union on the Phase 2, said last month that although it views the Phase 2 health and safety protocols as "very comprehensive ... (it) cannot mitigate all risk."

On-ice sessions are to be non-contact and can involve up to six players, who will be expected to maintain physical distancing at all times. Players are required to wear masks when entering and exiting facilities, and when not able to distance, but not when on the ice or exercising.

Coaches and management are allowed to watch, but not participate in, the informal skates.

Players and staff are to be administered COVID-19 nasal swab tests two days before training begins, and will be tested twice a week afterwards. They're also expected to perform daily self-administered temperature and symptom checks at home before heading to their team's arena.

Clubs must also administer "a separate temperature and symptom check at the entrance of the club facility."

Benning, whose wife is a nurse, said the nasal test wasn't a pleasant experience, but it's something he knows will be the new normal if the NHL is allowed to return.

"It's uncomfortable," he said. "There's players that are already on the ice, so we wanted to do whatever we could to get out there and get ready for what's ahead, regardless of what it is.

"Some players might complain about it, but at the end of the day, they're gonna do it."