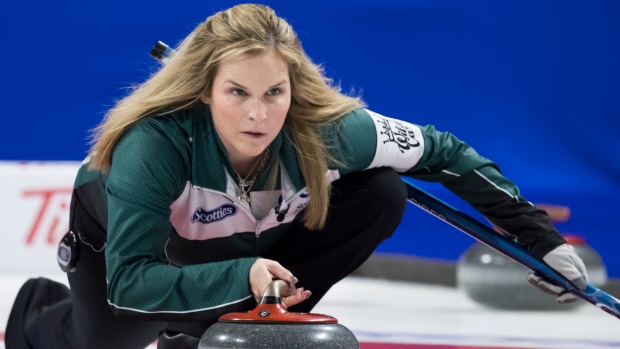 A bonspiel set to take place in Okotoks, Alta., featuring big names such as Jennifer Jones, Rachel Homan and Kerri Einarson has been called off after the province implemented new restrictions to help with the fight against COVID-19 on Thursday.

The Okotoks Ladies Classic played just one draw Thursday afternoon before shutting down following the announcement from the provincial government.

In response to today's AHS announcement, curling in the affected areas will be shut down at midnight tonight. These enhanced measures will be in effect from November 13-November 27.

See this link for the areas with enhanced measures: https://t.co/Tt5xtN4s26

The restrictions include a ban on indoor group fitness classes and team sport activities until at least Nov. 27.

The event featured 12 rinks, half of which have competed at the Scotties Tournament of Hearts.

"Unfortunate situation in AB but health will always be a priority. It was fun while it lasted! See you again soon! Thank you for the hospitality," Team Homan said on Twitter.

Unfortunate situation in AB but health will always be a priority. It was fun while it lasted! 👋🏼 See you again soon! Thank you for the hospitality, @OkotoksCurling

Okotoks is about a 30 minute drive south of Calgary.

COVID-19 cases have been rising in Alberta much like the rest of the country aside from Atlantic Canada.

Despite the cancellation in Okotoks, events are expected to take place in British Columbia, Saskatchewan and Nova Scotia this weekend.