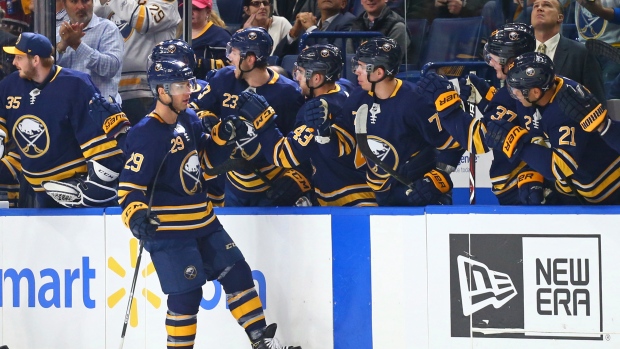 BUFFALO, N.Y. — Jason Pominville acknowledged this was a game the Buffalo Sabres would have lost last season.

Kyle Okposo scored on a power play with 1:01 left in the third period, and the Sabres rallied from three one-goal deficits to beat the Montreal Canadiens 4-3 on Thursday night.

"It shows a lot about the group we have, the resiliency we have," said the 35-year-old Pominville, Buffalo's oldest player, who scored twice and screened in front of the net on Okposo's winner. "Last year, we probably would've got in our shell and wouldn't have had a push back, a fight back. But now it's a different team."

Sam Reinhart also had a goal in the third period and Jeff Skinner had three assists for the Sabres, who have won three straight to improve to 6-4-0 — their best start after 10 games since the 2011-12 season. Carter Hutton stopped 19 shots.

"You're seeing a brand of hockey that we're playing right now that we're sticking to our game plan," said defenceman Jake McCabe, who had two assists. "Even if we fall down in a game like tonight, 3-2 late, you don't see a change in us. That's something that's been a big difference from past years that I've been here."

Max Domi scored two goals for the Canadiens, who were beaten in regulation for the first time in six games. Joel Armia had the other goal and Antti Niemi made 38 saves.

"I found they were much better than us tonight," Canadiens coach Claude Julien said. "In the battles along the boards, they won the majority of them. They were on the puck more often than us. At the end of the day, they were more determined."

Buffalo had a 15-4 advantage in shots on goal in the third period.

Rookie Rasmus Dahlin set up Okposo's one-timer from above the right circle for the winning goal. A tripping penalty on Armia put the Sabres on the power play with 1:19 remaining.

"You can't get frustrated and think 'Woe is me,'" Okposo said. "You just go and play the same way and when you play the right way, you get rewarded."

Reinhart's first goal of the season tied the game for Buffalo with 6:53 left in the third period. Jake McCabe fed Reinhart in the right slot for a one-timer.

Domi scored his second of the game and fourth of the season on a low wrist shot from the right slot 6:34 into the third period.

Pominville netted tying goals for Buffalo twice in the second period and tied Thomas Vanek for 10th in franchise history with 497 career points. Jeff Skinner assisted on both of Pominville's goals.

Pominville poked in the rebound from his own shot with just under nine minutes left in the period and rose up from his knees to lift a loose puck over Niemi on a power play with 2:18 remaining. Niemi was scrambling back into position after getting tangled with Pominville outside the net, but the goal was upheld after Montreal challenged for goaltender interference.

Armia had put Montreal ahead 2-1 with his wraparound goal less than two minutes earlier.

Domi extended his point streak to five games and gave the Canadiens the lead 1:17 into the game. The scoring chance started with Atturi Lehkonen's forecheck along the right boards. Domi collected the bouncing puck outside the face-off circle, manoeuvred around Pominville and sent a wrist shot over Hutton's shoulder.

"You're not going to win every game in an 82-game season," Domi said. "So we're learning how to lose and come back from it. That's the next test. Can't lose two in a row."

NOTES: Sabres D Rasmus Dahlin and Canadiens C Jesperi Kotkaniemi, the No. 1 and No. 3 overall picks in the 2018 draft, played against each other for the first time. ... Niemi started in place of Carey Price, who tied Patrick Roy for second in Canadiens franchise history with 289 victories in Tuesday's 3-2 win over Calgary. ... Skinner has recorded a point in four consecutive games.

Montreal: At Boston on Saturday.

Buffalo: At Columbus on Saturday.